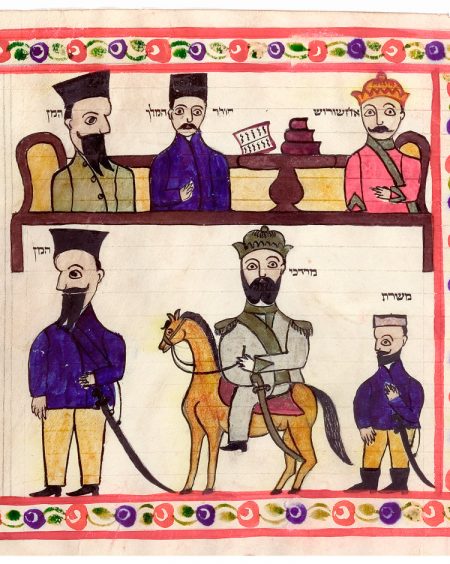 This scroll combines Indian and Western traditions in a unique way. Twenty elaborately illustrated panels flank the text columns. The first image is distinctive in its depiction of a contemporary reading of the megillah. The artist rendered how the scroll is folded over to look like a letter during the public reading, in accordance with the rabbinic dictum. The reader is shown surrounded by men wearing fezes and children holding drums used as noisemakers to drown out the name of Haman. A group of five women is portrayed in a separate space above labeled ezrat nashim (women’s section).

The initial images relating to the text are illustrations of Esther 1:10–14. In the first, Ahasuerus orders his seven eunuchs, dressed in military uniform, to bring Vashti before him. In the second, the king and his seven highest-ranking advisors determine the fate of his disobedient queen. In these two scenes, and throughout the work, the name of each figure has been inscribed by the artist. The figures are depicted in a mixture of contemporary, Western and non-Western clothing, and often are seated in interiors that portray a similar blend of furnishings. Some of the women, including Esther at times, are shown with a bindi on their foreheads.

The depiction of some of the episodes is notably different from that found in illustrated megillot produced in Europe. This is evident in scenes in which the vengeance of the Jews on their enemies is portrayed. In Western manuscripts the victors frequently were shown standing on the dead and dying, a convention of medieval origin. In this scroll, however, the bodies have had their limbs severed or have been decapitated. Also rarely depicted in Western art, and not part of the biblical story, is a scene in which Haman is shown having his beard pulled to humiliate him before his execution.

This scroll, which comes from the collection of the eminent Sassoon family, was most likely created for their personal use. Originating in Baghdad, members of the Sassoon dynasty relocated to Bombay in 1832 and rose to financial, cultural, and religious prominence in the nineteenth century. The melding of Jewish scribal traditions and Indian artistic design reflects the Sassoon family’s deep involvement in the cultural life of India.