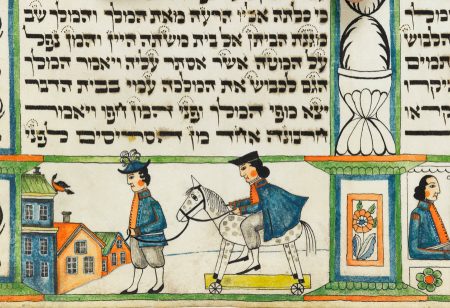 This relatively modern megillah is one of the most remarkable decorated Esther scrolls in existence. The figures were most likely inspired by the famous Guignol puppet theatre of Lyon, France, which was very popular during the entire nineteenth century. It is believed that the megillah was once the possession of a rabbi of the Jewish community of Lyon, which would confirm the Lyon origin of the scroll. The scroll is full of humorous scenes in one of which, for example, Queen Esther holds the strings of the puppets Ahasuerus and Haman. Within the columns male figures appear who seem to occupy boxes in the puppet theatre, watching the Esther puppet theatre below.