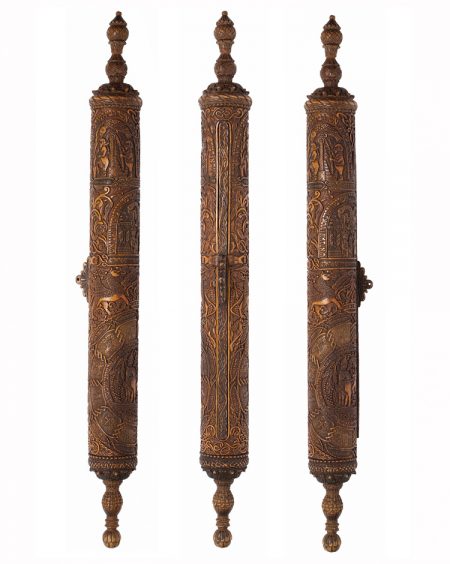 This Esther scroll case is an exceptional work of woodcarving artistry. Few elaborately carved private Jewish ceremonial objects of wood have survived. Eastern European artisans and artists were famed for their creativity and skill in the closely related folk arts of papercutting and carving. Tombstones and synagogue arks are the best known traditional formats for Jewish carving. These carving traditions were closely related to the motifs, interlaces, and patterns of papercut mizrah and shivviti plaques, and to the artistic heritage found in the architecture, interior painting, and carved furnishings of Eastern European wooden synagogues.

This case features lavishly carved vignettes from the Purim story, all inscribed in Hebrew with appropriate verses from the book of Esther. The decoration in the lower section is interspersed with carved Signs of the Zodiac, identified in Hebrew. Two rampant lions flank Esther’s crown in the midsection of the case. The maker carved his name below this crown and at the top of the case.

A double-headed eagle, a symbol of the Austro- Hungarian Empire, is included above one vignette. It is likely that Ezekiel Joshua Maisels, the artist of this piece, moved from Dolina, a small town in Western Ukraine, which was formerly part of Poland and later the Austro-Hungarian Empire, to a larger urban center. There he worked as a woodcarver and had access to a larger group of patrons for his work. As he recorded his name as “of Dolina,” it is likely that by the time of the creation of this piece he had moved to another location where this different place designation would be meaningful. A similar, carved sandalwood Esther scroll case, formerly in the collection of the Rothschild Family, is in the collection of the Jüdisches Museum der Schweiz in Basel.