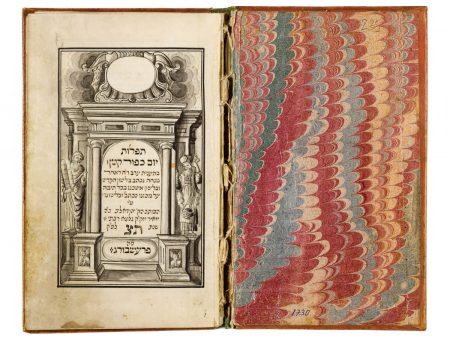 In biblical times Rosh Hodesh, the first day of the lunar month, was a day on which work was not allowed and important events took place. The prohibition against work was lifted in Talmudic times; since then Rosh Hodesh has been considered a minor festival.

At the end of the sixteenth century a custom developed among the mystics of Safed, in the Land of Israel, to fast on the day preceding Rosh Hodesh. A new liturgy was developed, based on penitential prayers for Yom Kippur. This fast was called Yom Kippur Katan, or the Minor Day of Atonement. In the course of the seventeenth century the custom spread to Italy and on to Northern Europe.

Manuscripts for Yom Kippur Katan, in vogue in the eighteenth century, included few illustrations. The Braginsky manuscript has only a baroque architectural title page with depictions of Moses and Aaron. The name of the owner was intended to be added to the empty shield at the top. The city of Pressburg and name of the scribe, Judah Leib ben Meir of Glogau (Silesia, Western Poland), are noted. No other manuscripts by him are known.

The script in this manuscript is similar to that of the famous scribe-artist Aaron Wolf Herlingen of Gewitsch. Moreover, the title page is strongly reminiscent of his works. If Judah Leib’s signature were not present, this manuscript almost certainly would have been attributed to Herlingen. It is possible that Judah Leib bought an illustrated title page from Herlingen that was devoid of text. This would ex- plain the presence of the empty shield and the fact that the title page is bound into the manuscript as a separate leaf. Another explanation may be considered as well. In a 1736 census mention is made of an unknown assistant living in Herlingen’s house in Pressburg (see cat. no. 39). Perhaps Judah Leib was Herlingen’s assistant. If this is true, existing attributions of unsigned works to Herlingen based only on images that appear in the manuscripts should be carefully reconsidered, as this evidence may be insufficient. [es]