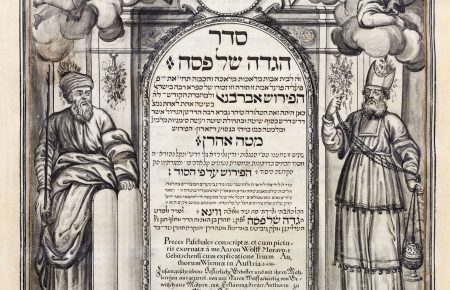 Aaron Wolf Herlingen had reached the pinnacle of his mastery, naming himself as the artist in Hebrew, Latin, German and French on the title page. With the exception of the Ten Plagues, done in color, all illustrations here were created in ink and gouache. On the map of the Holy Land, Herlingen drew the route of the people of Israel on their way through the desert. As a model he used the map of the Amsterdam Haggadot. However, he improved cartographical deficiencies such as the spatial division of the twelve tribes after conquering the Land of Canaan.