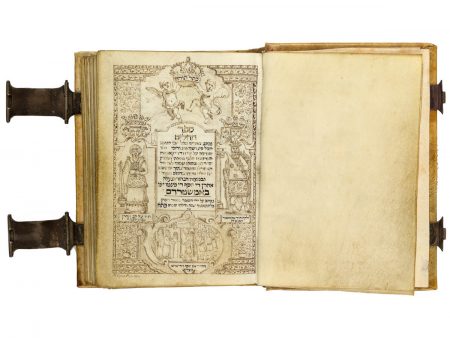 In 1728 Meir Cohen Belinfante copied this decorated psalter for Aaron de Joseph de Pinto, member of a prominent Portuguese-Jewish family in Amsterdam (see cat no. 38). The manuscript was copied from a printed edition by the Amsterdam printer of Hebrew and Spanish books, David de Castro Tartas, who was active between 1662 and 1698. Although Tartas printed two editions of the Psalms, in 1670 and 1682, only the 1670 duodecimo edition contained the introduction to the cantillation of the Psalms by Solomon de Oliveyra that was included here as well.

At the end of the manuscript, there is a text by the corrector, Isaac Saruk, who praised the precision of the manuscript and wrote a poem in honor of the patron. The poem includes an acrostic of the name Aaron, as well as a highlighted section with the Hebrew name Pinto, as the syllables “pin” and “to” appear at the end and the beginning of two consecutive words.

The manuscript has a decorated title page, one illustrated initial word panel, and two devices that imitate printed ornamental elements. All decorations, including the title page, were executed in brown ink similar to that of the text ink. The illustrated title page is signed by its artist: “Is.[hack] Siprut fec.[it], 1727.” Depicted on this page are David, the psalmist, and Aaron, clearly a reference to the first name of the patron. The name of the patron’s father, Joseph, explains the choice of bottom scene, in which the biblical Joseph is portrayed, most probably before his parents and brothers, pointing to the sheaves and stars of his dreams (Genesis 37:1–11). Also included are the crowns of the Torah (commonly associated with Moses, who does not, however, appear here), of priesthood (Aaron), and of kingship (David), taken from the Talmudic Sayings of the Fathers, 4:17.

Although copied when a school of manuscript deco- ration in central and northern Europe flourished in the eighteenth century, this psalter is not typical of the manuscripts it produced. The pen-work deco- ration in the De Pinto Psalter, instead, reflects an autonomous calligraphic tradition found in some Amsterdam Sephardic, often polemical, manuscripts in Spanish and Hebrew of the seventeenth and early eighteenth centuries, as does the monumental Sephardic square script. [es]