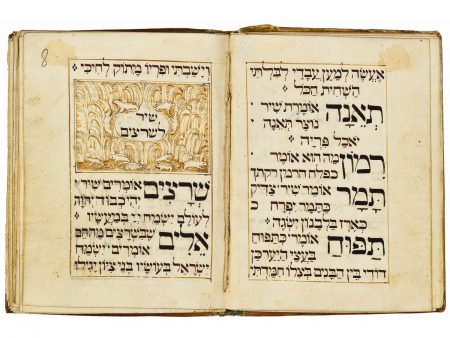 Perek Shirah is an anonymous song of praise to the Creator. Known since the first half of the tenth century, it consists of hymnal sayings by all creatures: the natural and supernatural orders, inanimate nature, the heavens and their hosts, and worlds of plants and animals. The sayings are mostly biblical verses, usually from the Psalms. There is hardly any connection between the texts and the creatures singing praise. On account of its unusual content, many rabbis disapproved of the work, but this did not prevent it from becoming popular. More than a hundred manuscripts, as well as some hundred printed editions, survive from the late Middle Ages on. Often published as a separate volume, the text appeared in daily prayer books as well.

Perek Shirah was illustrated by almost all important artists of the eighteenth-century Central European School, including Meshullam Zimmel ben Moses, the scribe-artist of this manuscript. Although Meshullam Zimmel is known to have worked in Prague, as well as in his native Polna (Bohemia), most of his manuscripts were executed in Vienna. He was most likely a copper engraver by profession, which explains his unparalleled drawing skills. To date six- teen signed manuscripts by Meshullam Zimmel, produced between 1714 and 1756, are known to exist. Another dozen manuscripts, including this unsigned manuscript, can be attributed to him with certainty. Among his works are two other manuscripts of Perek Shirah, both in private hands.

As stated on the title page, the present manuscript was written, or “engraved upon the plates” as the Hebrew text reads literally, for Hertz ben Leib Darmstadt of Frankfurt am Main. The manuscript contains an architectural title page and eight initial word panels executed in the same ink as the text. Folios 19 and 20 were added later in black ink. A small initial word panel appears on folio 19r. The initial word panel on folio 8r, illustrating the song of creeping animals, depicts ten frogs set within abundant foliage, while the one on folio 15r illustrates the song of domestic animals, represented by a horse, a cow, a sheep, and two species of goat. [es]

Perek Shirah (Chapter of Praise) and Kiddush le-Yom Tov (Sanctification of the Wine During a Festival) [Vienna, copied and decorated by Meshullam Zimmel of Polna], 1719