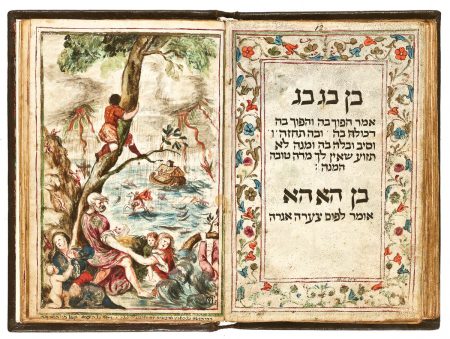 The most striking aspect of the Harrison Miscellany is its cycle of sixty full-page illustrations from the book of Genesis. Such cycles are otherwise unknown in post-medieval Hebrew manuscripts. The fine-quality illustrations, executed in gouache, are the work of a highly skilled artist, probably trained in Venice. Surrounded by a floral border, each miniature bears a Hebrew inscription, usually a biblical verse, identifying the scene. Facing each of the images are Hebrew prayers, poems, and sayings, unrelated to the illustration. The left-to-right sequence of the paintings indicates they were executed separately from the text, probably by a non-Jewish artist. An unidentified monogram, MC, appears in many of the scenes.

The text consists of prayers, blessings, and poems for a wedding ceremony, following the custom of the Jews of Corfu. Additional poems are by a variety of poets, some by writers of the Hebrew Golden Age in medieval Spain, others by local authors, including Rabbi Eliezer de Mordo. The de Mordos were a prominent Jewish family in Corfu whose members included physicians, rabbis, and community leaders. The family played an important role in the defense of Corfu, then under Venetian rule, against Ottoman invaders. At least two people by the name Eliezer de Mordo graduated as physicians at the university of Padua, in 1699 and 1765, respectively. It seems likely that Rabbi Eliezer de Mordo, whose poems appear in the Harrison Miscellany, is the physician who received his medical diploma in 1699.

Although the illustrations and the texts do not relate directly to one another, the depictions of the wedding scenes based on biblical stories, as well as the frequent representations of women, suggest that this extraordinary manuscript may have been com- missioned as a bridal gift, perhaps from a member of the de Mordo family to his bride. Cecil Roth made this manuscript famous by including numerous re- productions of its biblical scenes in the Encyclopaedia Judaica, which he edited. The manuscript, named after its former owner, was identified previously as Italian, probably from the seventeenth century. Later research proved conclusively that it was written in Corfu in the first half of the eighteenth century [MS]

Harrison Miscellany. Poems and Prayers for Weddings and Other Occasions
[Corfu, ca. 1720]