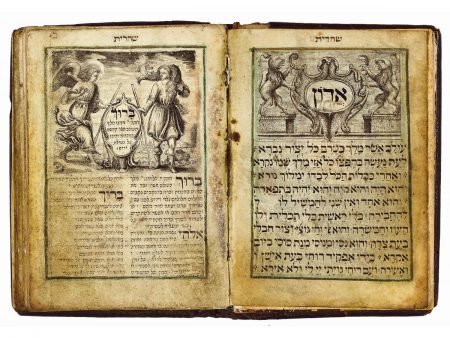 In 1712 an accomplished Moravian scribe in Vienna, Aryeh ben Judah Leib of Trebitsch, started what would soon become a second flowering of Hebrew manuscript decoration in Central and Northern Europe. Between 1712 and 1714 he copied a daily prayer book that is now in The Library of The Jewish Theological Seminary in New York (MS 9340). At the bottom of a dedication page he signed his name: “The young Aryeh Judah Leib Sofer, son of the late Elhanan Katz, of blessed memory, who passed away on Friday, 28 Iyyar in the year 5468 [1708] in Jerusalem.” Today some dozen manuscripts of his are known, among which at least five are daily prayer books.

Aryeh ben Judah Leib is the first recorded scribe to have written his manuscripts “with Amsterdam letters.” Title pages of books printed outside of Amsterdam in the late seventeenth and early eighteenth centuries often contained a statement that the books were printed with Amsterdam letters, as an indication of quality. Aryeh ben Judah Leib trans- posed this custom to manuscripts. As a number of his manuscripts contain images that were printed on parchment, he may have been involved in the printing industry, although there was no Hebrew printing in Vienna at the time.

On the basis of certain scribal features unique to him, this mohel book can be attributed to Aryeh ben Judah Leib with certainty. Its title page appropriately depicts a circumcision in a synagogue. The image inspired by the apocryphal book of Tobit on folio 2r, however, is highly unusual. It depicts Tobias, the son of Tobit, who is traveling with his guardian angel Raphael and a small dog. On his shoulder he carries a fish whose heart, liver, and gall he needs to cure his father’s blindness. Although quite well known in Christian art, the inclusion of this theme in a Hebrew circumcision book, or even in a Jewish object of art, is unexpected. The idea that Raphael was the guardian angel of children, prevalent especially among Catholics, seems likely to have been borrowed as an apt symbol of filial protection for this circumci- sion book. It seems likely that Aryeh ben Judah Leib took this image from an unknown Christian, perhaps printed, source. [ e s ]