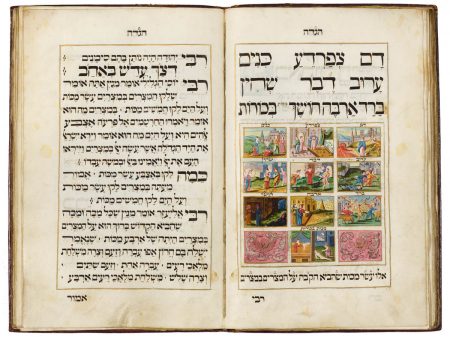 Nathan ben Simson of Mezeritsch (now Velke Mezirici, Czech Republic) is known to have produced at least twenty-five illustrated manuscripts, with dates ranging from 1723 to 1739. His output includes Haggadot, Grace after Meals, Tikkunei Shabbat (mystical prayers for the Sabbath), Tefillot Yom Kippur Katan (prayers for the Minor Day of Atonement), books for the counting of the Omer, and Psalms.

Most of the manuscripts of Nathan ben Simson of Mezeritsch do not mention a place of production; this Haggadah is no exception. One must take into account that the addition of a place to an individual’s name can indicate that that person was no longer living there. Although it is not known if personal or political reasons motivated his movements, it is obvious that he traveled. He may well have spent a number of years in Rotterdam, or have visited that city regularly; at least four of his manuscripts can be linked to Rotterdam patrons. A 1730 Haggadah in the National Library of Israel in Jerusalem (Heb. Ms. 8°2237) was copied for Alexander Segal of Hanover, whereas a 1723 Tefillot Yom Kippur Katan in a private collection was ordered by a Dusseldorf patron, Zalman ben Jospe.

The Haggadah in the Braginsky Collection contains a decorated title page, a cycle depicting ceremonial rituals performed during the seder, nine text illustrations, one decorated initial word panel, three historiated initial letters, and two pages with a cycle of illustrations for the concluding hymn Had Gadya (23r–v). These illustrations were an invention of the scribes of the eighteenth century and do not occur in printed Haggadot of the period, such as the Amsterdam Haggadot of 1695 and 1712, which other- wise were sources of inspiration for most of the handwritten, illustrated eighteenth-century Haggadot. Whereas most of his colleagues were draughtsmen, Nathan ben Simson was a talented painter. As such, his work is strongly reminiscent of another Moravian artist of the period, Moses ben Judah Leib Wolf Broda, the scribe-artist of the famous Von Geldern Haggadah (also see cat. no. 38). [es]

Passover Haggadah with Yiddish translation of Had Gadya [Central or Northern Europe], copied and decorated by Nathan ben Simson of Mezeritsch, 1730