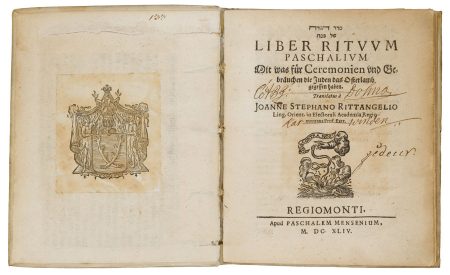 Johann Stefan Rittangel, a Christian Hebrew scholar, was the first to translate the Passover Haggadah into Latin and German. His translation also contains the melodies of the prayers sung to conclude a seder. The intense interest of Christian Hebrew scholars in the Hebrew language and grammar, and Jewish texts was intended to convince Jews to convert. Only when this goal was achieved would the redeeming End of Days come.

Liber Rituum Paschalium: The Ceremonies and Customs with which the Jews Ate the Paschal Lamb, 1644, Johannes Stephanus Rittangel, Königsberg.