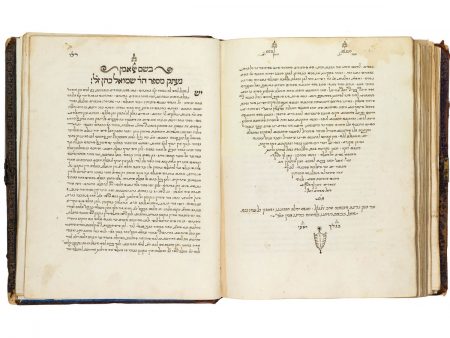 During the Middle Ages Spain was the Jewish world’s center of kabbalistic thought and practice. The classic kabbalistic text of the late thirteenth century, the Zohar (Book of Splendor), was written in Spain, where more controversial movements, such as Abraham Abulafia’s school of ecstatic kabbalah developed as well (see cat. no. 9). After the expulsion of the Jews from the Iberian peninsula at the end of the fifteenth century, the small city of Safed, Upper Galilee, soon became the new center of the kabbalistic movement; it was from there that Kabbalah conquered both the Jewish and non-Jewish worlds.

The leading figures in Safed were Moses ben Jacob Cordovero (1522–1570) and his pupil Isaac ben Solomon Luria (1534–1572). One of the most important concepts among the kabbalists of Safed was that of mystical prayer. For them prayer was not, as Gershom Scholem wrote, “merely the institutionalized acknowledgment and praise of God as Creator and King by the religious community.” Rather, “the individual’s prayers . . . are under certain conditions the vehicle of the soul’s mystical ascent to God.” The central concept in this doctrine was that of kavvanah (mystical intention; plural, kavvanot). Tefillah le-Moshe contains kavvanot for weekdays and the Shabbat. Its text was published in Przemysl in 1862, based in part, perhaps, on this manuscript.

The round Hebrew cursive, semi-cursive, and square scripts used in the manuscript are enhanced by a variety of pen-work foliage designs. On the title page the scribe wrote “copied by the young and insignificant, worm and not a man, AR”I, in the city of Modena.” Ari is the Hebrew word for “lion,” but should be understood here as an abbreviation of the copyist’s name; it is also the nickname of Isaac Luria (see cat. no. 33). It is tempting to identify this copyist with the well-known writer Judah Aryeh (Leone) Modena (1571–1648), who was at the height of his activity in 1615. Although Leone Modena’s hand resembles that of the scribe of the Braginsky manuscript, the paleographical evidence for such an attribution is unconvincing, as was confirmed by Benjamin Richler. [es]