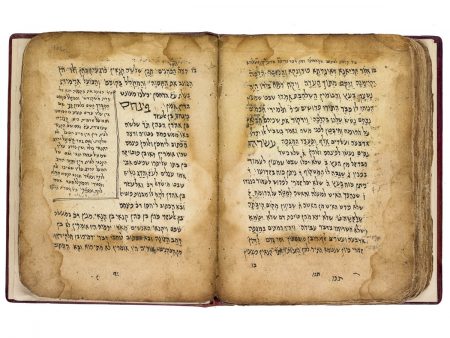 “Of him great deeds and wonders and miraculous and amazing acts are related that he did for Israel and against the mighty and cruel kings that torment- ed and did evil with Israel in his days, for in his days they exiled the Jews in San’a.” Reference is made here by the well-known traveler Jacob Saphir of Vilna (1822–1855) to the greatest of Yemenite Jewish poets, Shalom Shabazi. Little reliable information about Shabazi’s life is available. What is known comes from his own works, some 550 poems and a few other texts. Among these is his homiletical commentary on the Pentateuch, of which this Braginsky manuscript is an early example. Many legends about the national poet existed among the Jews of Yemen. During his lifetime the political situation for the Jews of Yemen was one of great turmoil, persecution, and messianic anticipation. Shabazi invested his poetry, written in a popular, relatively accessible style, with feelings of hope and redemption.