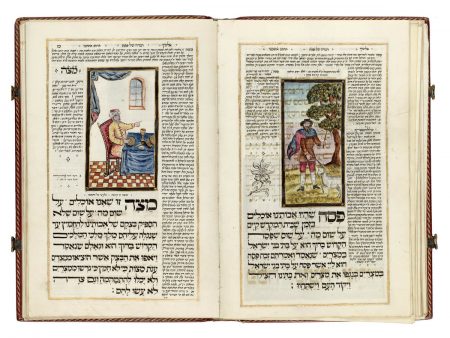 Hijman (Hayyim ben Mordecai) Binger (1756–1830)
is best known for a decorated daily prayer book, now in the Bibliotheca Rosenthaliana (Hs. Ros. 681) in Amsterdam, which he executed in cooperation with his sons, Marcus and Anthonie, in 1820. He also copied numerous single-leaf manuscripts of contemporary poetry, mostly for family occasions, which are now housed in various collections worldwide. Binger began his career as a bookkeeper, but later worked primarily in a clothing rental business; he also may have been active in international trading. In 1827 he inherited a lending library from his brother, Meijer Binger, to which he devoted most of his time.

Both the above-mentioned prayer book and the
Hijman Binger Haggadah typify Hebrew manuscript decoration in Central and Northern Europe at the end of the eighteenth and the beginning of the nineteenth centuries. The previous flowering of Hebrew manuscript ornamentation and illustration started to decline around the middle of the eighteenth century. With few exceptions, notably a number of late- eighteenth and early-nineteenth century examples from Hungary (such as cat. no. 54), the Bouton Haggadah (cat. no. 56) and the Charlotte von Rothschild Haggadah (cat. no. 55), most later works randomly copied iconographic and stylistic elements from the vast tradition of the preceding centuries. As a result, the later manuscripts lack the internal consistency and relative unity of style of the earlier examples.

In light of similarities between the illustrations in the Hijman Binger Haggadah and those in some of the later Haggadot executed by Joseph ben David 0f Leipnik, for example, the Rosenthaliana Leipnik Haggadah of 1738 and a Leipnik Haggadah from 1739 (cat. no. 45), it is likely that a Haggadah by this artist served as Binger’s primary model. The inclusion of a Hebrew map of the Holy Land, printed in the Amsterdam Haggadah of 1695, though not unique to eighteenth-century manuscripts, may well be considered a rarity. [es]