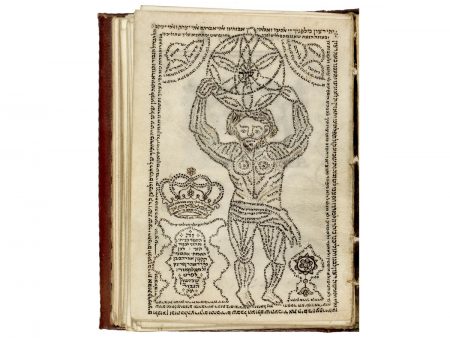 at the end of the evening prayer. In the eighteenth century special Omer calendars in many different designs were popular.

Barukh ben Shemariah of Brest-Litovsk, Lithuania, included his name in the information provided on the title page. He is known to have produced four other manuscripts in Amsterdam: two unsigned Omer booklets from 1794 (Jerusalem, Israel Museum, 180/29, and a private collection), another from 1799 (Brussels, Musée juif de Belgique), and a signed single-sheet micrographic Song of Songs dated 1794 (New Haven, Yale University, Beinecke Library, Heb. +93:11). The name of the patron of the Braginsky Collection manuscript, Aaron ben Abraham Prinz of Alkmaar (the Netherlands), appears on the title page. He and his wife, Reina Kobrin, purchased the manuscript together, and gave it to his nephew, Abraham ben Aaron Prinz, whom they raised.

Some of this information also appears on folio 2r, a page embellished with micrography, a technique popular during the Middle Ages, but uncommon in later Hebrew codices (cat. nos. 54 and 66). Filling the page, the biblical Samson depicted as a loincloth- clad Atlas, carries a globe above his head. According to a midrash, Samson, whose body was gigantic, had superhuman strength. For reasons unknown, Sam- son is referred to in the chronogram at the end of the inscription under the crown at the lower left.

Forty-nine small quatrefoils, each with the number of the day being counted that night, are followed on folio 18r by the text of Psalms 67, penned in
the shape of the menorah. The seven verses of the psalm are written on the seven branches of the candelabrum. The forty-nine words of the psalm correspond to the forty-nine days of the Omer; every day represents another word. One of the three large abbreviations of well-known ethical verses – “Atlas” (“‘[God] is good to Israel,’ selah”; Psalms 73:1) – was perhaps the inspiration for the image of Samson. [es]

Sefirat ha-Omer (Counting of the Omer), and other prayers
Amsterdam, copied and decorated by Barukh ben Shemariah, 1795