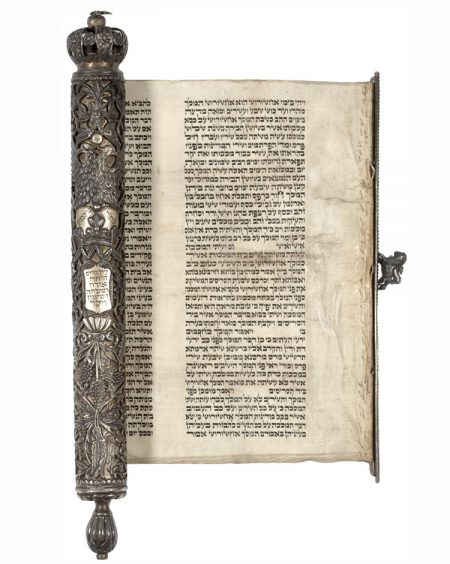 This elegant Esther scroll case is decorated with
a profusion of floral, fruit, and vegetal ornaments, interspersed with fanciful animal forms. The con- trast of the silver against the gilt background adds to the dimensionality of the piece. The metalwork tracery in this case recalls the scrolling vegetal forms, lions, and birds often seen in synagogue Torah arks and papercut mizrah plaques in Eastern Europe. Jewish folk artists there were famed for their inventiveness and skill in the related folk arts of woodcarving and papercutting.

The double-headed eagle, symbol of the Austro- Hungarian Empire, tops a Hapsburg-style crown, and creates a central focus for the case’s decorative composition. Below this crown a shield is inscribed with a Hebrew verse from the book of Esther: “The Jews enjoyed light and gladness; happiness and honor” (Esther 8:16), with two flanking flags in- scribed “and the royal crown which is set upon his head” (Esther 6:8). The cast three-dimensional lion-form clasp of the thumbpiece is an unusual feature of this case.