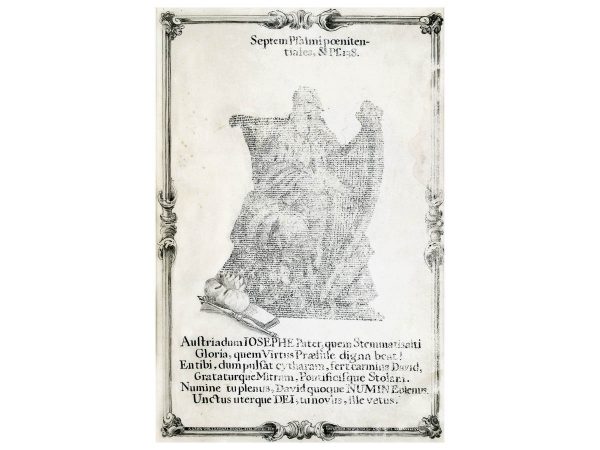 This calligram, a decorative form created from a written text, depicts King David playing a harp. It comprises the Latin texts of what is known as the Seven Penitential Psalms (6, 31, 37, 50, 101, 129, and 142) and of Psalm 138. The grouping of these psalms is in the Roman Catholic, not Jewish, tradition. The seven psalms are sung during the days of Lent, the forty days before Easter. The artist used microgra- phy, a technique in which text is written in miniscule letters. In order to produce a clear image he first painted the figure of David using faint gray washes for modeling and then varied the intensity of the

ink used for the text. The calligram is signed “Aaron Wolf, Kayserl. Königl. Bibliothec-Schreiber in Wienn. Anno 1751” (Aaron Wolf, Imperial and Royal Library Scribe in Vienna. Year 1751) in the framing element at the bottom. This is the well-known Jewish scribe- artist Aaron Wolf Herlingen, the creator of a Haggadah from 1725 in the Braginsky Collection (cat. no. 39; also see cat. nos. 47 and 41). He also signed his name “Aaron Wolf 1751,” at the end of the last line of the calligram here. Herlingen was a gifted calligrapher and one of two Jewish scribes of the eighteenth century who wrote not only Hebrew, but also Latin. Among his most interesting works are five calligraphic single-sheet manuscripts of sizes smaller than a modern letter-size sheet of paper on which he combined the texts of the Five Scrolls in five differ- ent Semitic and European languages and types of script. Two unsigned illustrated micrographic Esther scrolls are also attributed to him.

Herlingen wrote this calligram for Prince Joseph II (1741–1790), the son of Empress Maria Theresa and Emperor Francis I. The Latin dedicatory inscription at the bottom compares the young prince’s lineage to that of King David, who is traditionally believed to be the author of the book of Psalms. Other cal- ligraphic works by Herlingen and by his contempo- rary Meshullam Zimmel of Polna, who also worked in Vienna, were dedicated to the Imperial family as well. It is not known how these works were present- ed, if at all. [es]