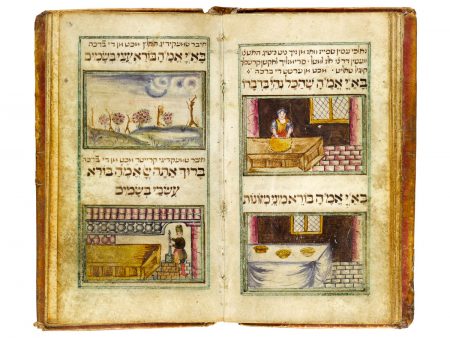 In addition to Birkat ha-Mazon (Grace after Meals) this manuscript contains Birkhot ha-Nehenin (Blessings over Enjoyments), Shalosh Mitzvot Nashim (Three Commandments for Women), and a Seder Keri’at Shema al ha-Mittah (Reading of the Shema before retiring at night). This combination of blessings and prayers was common during the eighteenth century. The inclusion of the three commandments incumbent upon women, hallah (the obligation to separate dough), niddah (the obligation to immerse in a ritual bath), and hadlakah (the obligation to kindle Shabbat and Festival lights), indicates that the book was done for a woman, perhaps as a wedding present.

The manuscript contains an architectural title page with Moses and Aaron, twenty-two smaller, color illustrations for the various blessings, which often rely on Christian iconographic sources, and three decorated initial word panels. Seen here are seven miniatures belonging to the Birkhot ha-Nehenin: the blessing over spices (alluded to by the image of a pharmacy), blessings upon seeing lightning, upon hearing thunder, upon seeing a rainbow, upon seeing a king, upon seeing different-looking people (depicted here as a dark-skinned man and a dwarf), and upon seeing the ocean.

In Hebrew the name of the town appearing on the title page reads: Tzilem Adam, a name often used to refer to the eastern Austrian town of Deutschkreutz. The Hebrew word for “cross” is tzelem, which can also mean “image.” This is the same Hebrew word used in Genesis 1:27: “in the image of God He created him,” where the word refers to Adam. In the Braginsky manuscript the problematic geographical name Deutschkreutz is translated with words that can be understood as “Image of Man.” The Hebrew name is also misspelled, to further distance any identification with the Christian symbol.

Although the manuscript is not signed, it may be attributed to the well-known scribe-artist Aaron Wolf Herlingen (see cat. nos. 39 and 48). This attribution rests on an analysis of certain scribal and artistic characteristics of this manuscript and on the similarity between this work and a number of signed manuscripts by him with similar content and decoration. This would prove that Aaron Wolf Herlingen worked not only in Vienna and Pressburg, but also in Deutschkreutz. [ e s ]

Seder Birkat ha-Mazon (Grace after Meals) and other prayers and blessings
Deutschkreutz, [copied and decorated by Aaron Wolf Herlingen?], 1751