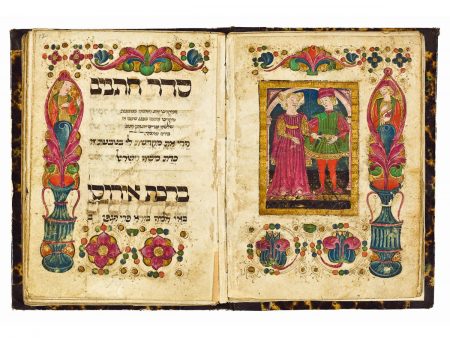 This unusual manuscript is a compendium of texts related to the human life cycle. Included are prayers for circumcision; a formula for a marriage contract (Correggio, 1452, without specific names); marriage rituals with an additional hymn with the acrostic El’azar; a marriage contract (Parma 1420, between Judah, son of Elhanan of Ascoli Piceno and Stella, daughter of Solomon of Mantua); prayers recited at the cemetery with a Grace after Meals for mourners; a ritual for the amelioration of bad dreams; Ka’arat Kesef (Silver Dish, an ethical poem by the thirteenth- century Provençal poet Jehoseph ben Hanan ben Nathan Ezobi); and a personal prayer by Moses Latif for Joab Immanuel Finzi (in a different hand). On folio 10r, in the formula for a marriage contract, the scribe included an obligation for the payment of a dowry, humorously adding that “all is a lie and false- hood, Leon ben Joshua who denies everything that is written above.” It was most probably the scribe who added the decorative pen work to the initial word panels that appear throughout the manuscript.

It is quite likely that the manuscript was produced as a wedding gift. The strongest indication of this is the double-page illumination that depicts a bride and groom at the moment of betrothal as the groom puts the ring on the bride’s index finger. Contrary to Jewish custom, the ring is put on the bride’s left, rather than her right, hand. The bride wears a horned headdress, a light veil, a pleated, full-skirted gown, with sleeves of a different material, a fashion that originated in Ferrara. The groom wears a pleat- ed, short cloak cinched with a gold belt, a jerkin, and hose. The floral border that frames the two pages includes a half-length figure of a man at either side. Possibly intended as the witnesses, the one on the right holds a book with a red velvet cover, while the man on the left points to the couple. As noted in the catalogue of the auction in which the manuscript was acquired for the Braginsky Collection, this type of illumination is consistent with that found in fifteenth-century Ferrara. [es]