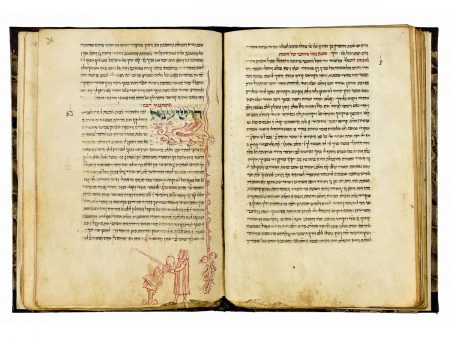 Authorship of this book of religious customs is not entirely clear. Its teachings rely on the insights of Jacob Moellin (1360–1427) of Mainz, one of the major halakhic codifiers in the Ashkenazic world. The at- tribution of the work to Samuel of Ulm is based on a former Jews’ College, London, manuscript (ms. 28,1; presently in the Jesselson Foundation), in which the author is identified as such.

The Braginsky manuscript contains seven fine, red ink drawings. These are part of a tradition of scribal decoration that flourished in northern Italy in the last third of the fifteenth century. The most important representative of that tradition was Joel ben Simeon, the scribe-artist of such famous medieval Haggadot as the Ashkenazi Haggadah (London, British Library, Add. MS. 14762) and the Washington Haggadah (Washington, Library of Congress, Hebr. 1), both of which have been reproduced in facsimile editions.

Particularly striking in the manuscript are the human heads, usually depicted in profile. Suspended from an initial word panel, on folio 31, the bearded head of a man with a long bumpy nose and heavy eyelids appears in many works associated with Joel ben Simeon. Some of his most frequently rendered mo- tifs, such as hares and large architectural structures with round towers, appear in this manuscript as well. Although the art clearly is similar to that found in manuscripts by the hand of Joel ben Simeon, it cannot be determined with certainty that he deco- rated this work.

On folio 36r, the initial word panel for the Hebrew word hosha’ana, at the beginning of the section dealing with Hoshanah Rabba, the seventh day of the Sukkot festival, is embellished with a depiction of a dragon. This is also a recurring motif in works by Joel ben Simeon. In the bottom margin a man, viewed in profile, wears what is known as a cappuccio a foggia. This contemporary head covering also appears in other manuscripts associated with Joel ben Simeon. Standing near a lectern on which an open book rests, the man holds a lulav (palm branch) and an oversize etrog (citron). Delicate red pen work embellishes the inner margin of this page. [es]