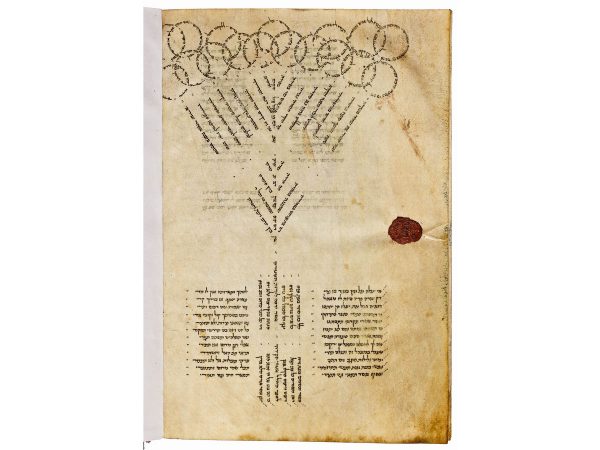 Mordecai ben Eliezer Comtino (1420–ca. 1485) was one of the leading Byzantine scholars of his time. He was born in Constantinople and lived there for most of his life. He studied mathematics and astronomy, on which he wrote numerous, mostly unpublished, works. He was in close touch with the scholars of his day, including the leaders of Constantinople’s Karaite community. The Karaites are a group of Jews who reject the Oral Law and accept the authority of the biblical laws only. Among Comtino’s many students Elijah Mizrahi (ca. 1450–1526), perhaps the greatest of all Byzantine rabbinic scholars, is, no doubt, the most important. Comtino’s commentary on the Pentateuch, which at the beginning of the work he calls Kelil Yofi (Perfect Beauty), but is also known as Ma’amar Mordekhay (Mordecai’s Treatise) and Keter Torah (Crown of the Torah), exists in three other manuscripts and a number of fragments. At the end of the commentary, the author states that he finished writing it in Constantinople in 1460.

On the last page of the manuscript a poem by Comtino copied in the shape of a fruit-bearing tree appears. The poem begins at the bottom right of the page with the Hebrew words mi ya’aleh al etz be-od bo peri (Who will climb a tree, while it still bears fruit). This part constitutes the soil on which the tree stands; it contains the acrostic Mordekhay Komtino. The opening and closing verses of the second part form the roots of the tree, with the first letter of each line creating the acrostic Mordekhay at the bottom. The trunk is created of partial words, the continuations of which can be read as sixteen branches that grow to the left and right. The final part of the poem is written in seventeen intertwined circles, as fruit sprouting from the branches. The tree is based on a similar calligraphic one made for Rashi’s grandson, the French scholar Jacob ben Meir Tam (ca. 1100–1171), by the medieval Spanish scholar and poet Abraham ibn Ezra (1089–1164), a man admired greatly by Comtino. The structure was discussed in detail by Dan Pagis, who also described another tree by the Spanish poet Todros Abulafia (1247–after 1298), one that may have inspired Comtino. [ e s ]