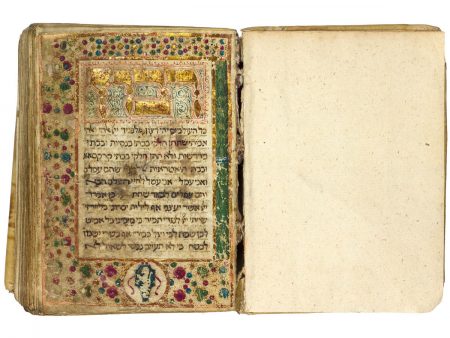 Daily Prayer Book According to the Italian Rite

The Roman rite, or Minhag Roma as it is generally known, is the oldest order of prayer outside the ancient lands of Israel and Babylonia. It retains many old Palestinian traditions. The definitive study of the Roman rite, summarizing more than one hundred years of scholarly research, notably by Samuel David Luzzatto (1800–1865) and Leopold Zunz (1794–1886), was published in 1966 by Ernst Daniel Goldschmidt (1895–1972). The Braginsky manuscript reflects some interesting textual variants and contains a number of readings that would gradually be replaced, such as the text she-lo asani goy, ([Blessed . . . ], who did not make me a non-Jew) in the morning benedictions; in the majority of later, sixteenth- and seventeenth-century, Roman-rite prayer books, this text reads she-asani yisra’el, ([Blessed . . . ], who made me an Israelite).

The manuscript was copied by Samson ben Elijah Halfan. The ornamentation includes many attractive initial word panels, decorated with geometric designs and floral pen work, usually in red and blue ink. The opening page is illuminated. On it the initial word Ribbon (Master [of all Worlds]) is set within a rectangular panel with red and blue filigree pen work and gold-leaf letters. Surrounding the page is a border filled with red, blue, and green flowers ornamented with gold pen work; gold-leaf dots embellish the border throughout. The inner margin is filled with a vertical arrangement of lush green leaves. An unidentified family emblem, which depicts a rampant lion, appears in the bottom border.

This is the second manuscript in the Braginsky Collection that was copied by a member of the Hal- fan family of scribes and scholars, whose ancestors were among a group of Jews expelled from France in 1394 and found refuge in Piedmont, in northern Italy (see cat. no. 18). In colophons of other manuscripts by the scribe Samson ben Elijah, he refers to himself as ha-Tzarfati, the Frenchman. [ e s ]