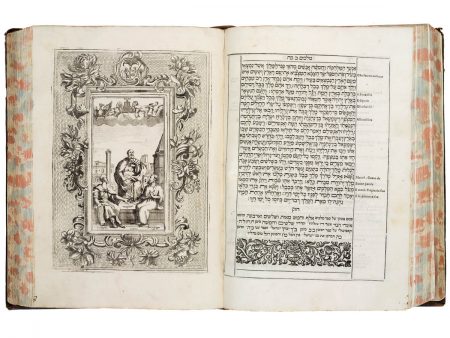 550 editions between 1641 and 1740 indicates, how- ever, that Venice remained a center of considerable importance. One of the most significant dynasties of Venetian Hebrew printers was that of Bragadin. It was founded in 1550 by the nobleman Alvise Bragadin, who played an important if involuntary role in the banning of the Talmud in Venice in 1553 (see cat. no. 25).

This Hebrew Bible of 1739 was printed in the Bragadin printing office at the request of the physician Isaac Foa, whose name is given on the first title page. The edition is especially famous for its four engraved frontispieces. They were cut by Francesco Griselini (1717–1787), who was born into a family of silk weavers and merchants; later in life he achieved consider- able repute as a scholar of natural history. While he produced numerous engravings for non-Jewish printers, in the Jewish world he is known for his engraved borders for megillot (cat. no. 85).

The first frontispiece, depicting the Sacrifice of Isaac, is particularly elaborate. Eleven images illustrate events from this biblical story, starting at the top right with God’s order to Abraham to take his only son, and culminating in the large central scene of the intervention of the angel of God. The three other frontispieces, to the Former Prophets, Latter Prophets, and to the Hagiographa, are less elaborate. They depict: Joshua and Samuel crowning King David; Isaiah, Ezekiel and Jeremiah; and King David reciting the Psalms.

The biblical text is accompanied by Italian glosses, mostly translations of presumably difficult pas- sages. The editors clearly had scholarly pretensions, claiming that this edition was based on, among others, the well-known early study of the Masoretic text Or Torah (Light of the Torah) by Menahem Lonzano (1550–before 1624). [ e s ]

Hebrew Bible with Italian glosses
Venice, printed by the workshop of Bragadini for Isaac Foa, 1739