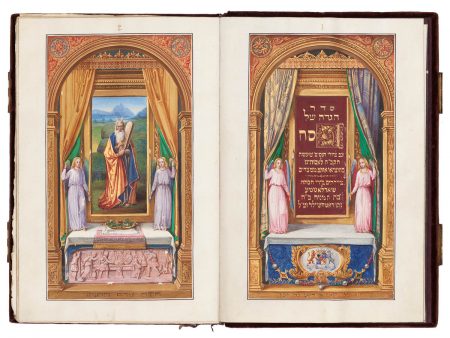 In his memoirs, the first modern Jewish painter, Moritz Daniel Oppenheim (1800–1882) wrote: “But the culmination of my instruction came when she illustrated the Haggadah for her uncle Amschel.

I made the designs for the subjects, and she carried them out in the style of old missals. . . . For this she procured . . . from the Paris Library manuscripts with illuminated miniatures.” Oppenheim is referring to Charlotte von Rothschild (1807–1859), the niece of Amschel Mayer Rothschild (1773–1855), for whom she created the Haggadah on the occasion of his seventieth birthday. She included a German dedication and wrote her initials on the back of a chair in the scene of a contemporary seder. While some of Oppenheim’s preparatory sketches are discussed in art-historical literature, until the manuscript’s recent acquisition for the Braginsky Collection researchers were unaware the codex was extant.

This Haggadah, the only Hebrew manuscript known to have been illuminated by a woman, contains ten full-length and eight smaller text illustrations, in addition to decorated and historiated initials, and smaller ornamental devices. Particularly interesting are the illustrations accompanying Ehad Mi Yode’a and Had Gadya. Framed within foliate designs and placed in a columnar arrangement within the text space, to the left (on pages 92 and 94) or right (96 and 98) of the writing, a small vignette illustrates each of the references in the two songs. The inclusion of these scenes reflects the familiarity of Rothschild and Oppenheim with manuscripts of the eighteenth century, which included such cycles created in that period for handwritten, rather than printed, versions of the Haggadah. In the Charlotte von Rothschild Haggadah, the miniatures in Ehad Mi Yode’a and Had Gadya, as well as other scenes throughout the work, demonstrate that earlier models were not copied slavishly. Instead, original compositions and images based on previous sources were combined to create a masterpiece of nineteenth-century book art. [es]