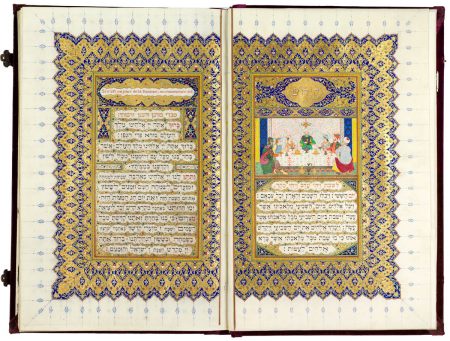 This is one of the most unusual Hebrew manuscripts of the post-medieval period. Every page is illuminated with geometrical designs executed in lapis lazuli and gold; subtle, multicolored floral elements with separate designs surround individual lines

of text, while delicate blue pen-work extends into the outer margins. Tiny sprinkles of gold embellish the pages. The manuscript emulates closely works from a school of Arabic manuscript illumination of Shiraz, Persia, of the period between 1560 and 1580. The designs also appear in later Arabic manuscripts, especially from Turkey and Afghanistan.

The sole illustration depicts a seder scene in which five men and two women, most of whom are dressed in orientalized clothing, sit at a table. The central male figure is reciting the benediction over wine. It is striking that the table is devoid of anything related specifically to Passover, including the ceremonial foods eaten at the seder.

The Haggadah was decorated by Victor Bouton, who is best known as a heraldic painter. Born in Épinal in the Vosges region in northeast France in 1819 and active in Paris most of his life, he was involved in politics, and imprisoned between 1851 and 1856. Recently Sharon Mintz was able to identify the artist based on a signed, equally sumptuous, daily prayer book, which is now in the Musée d’art et d’histoire du Judaïsme in Paris. It was commissioned by Edmond James de Rothschild (1845–1934) for his mother Betty (1805– 86). Notably, Bouton signed his name in Hebrew there, followed by the Hebrew words Sofer mahir (skilled scribe), a common designation of professional Jewish scribes. Bouton, therefore, may also be identified as the scribe of both masterpieces. P. Heili reports that Bouton received the enormous sum of 32,000 gold francs for a Haggadah he executed for a wealthy Israelite. It is likely that Heili was referring to the Braginsky manuscript, which may have been another Rothschild commission. [ e s ]

Passover Haggadah, with ritual instructions in French
[France, copied and decorated by Victor Bouton, second half of the 19th century (ca. 1870?)]