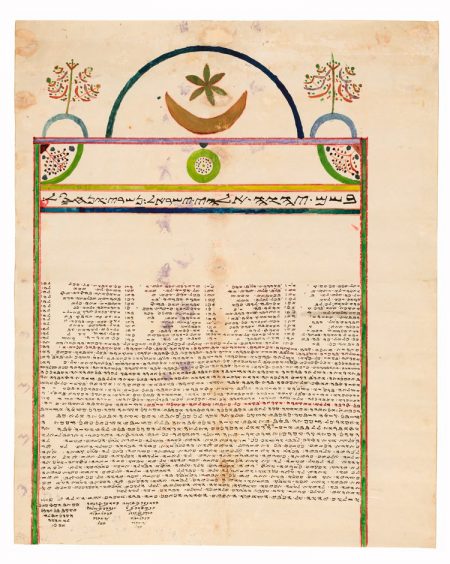 Believing themselves to be the true followers of ancient Israel, the Samaritans trace their origins to the biblical period. Their religious observances, which they follow strictly to this day, stem solely from the Pentateuch. Moses is the only recognized prophet; the holy place is Mount Gerizim in Shechem, rather than Jerusalem, which is not mentioned directly in the Pentateuch. Despite many persecutions, the Samaritans resided continuously in the Land of Israel. At their height they numbered more than a million (fourth–fifth century CE). Today the community, living in Nablus and the town of Holon in Israel, numbers around 725.

Although the commandment to write a ketubbah is not mentioned in the Torah, the Samaritans adopted the rabbinic custom based on their interpretation of Exodus 21:9 and 22:6. The docu- ment is commonly referred to as sefer ha-zivug (Book of Coupling) or mikhtav ha-devika (Letter [or Deed] of Bonding). It is drawn at the time of betrothal rather than at the wedding. The earliest known Samaritan contracts date from the six- teenth century. The basic language of the docu- ment is Samaritan Hebrew, written in Samaritan script, reminiscent of ancient Hebrew script. It is drawn on one side of a sheet of paper, which is often large and ornamented. The text, inscribed in calligraphic script, employs flowery language. It is divided into three sections: an introductory poetic formula in rhyming verses; the date and an elabo- rate description of the participants; and the terms of the bond, followed by the signature of the priest, the scribe, and other community dignitaries.

Reflecting a strict interpretation of the Second Commandment, the decoration of Samaritan contracts is limited to floral and geometric designs in bright colors. In the Braginsky Collection contract an additional motif is noteworthy: the gilt crescent and star motif within the lunette at the top center. Undoubtedly this is inspired by the Ottoman imperial emblem, which also appears on Judaic objects from Islamic lands. The contract documents the betrothal of an important bride, the daughter of the noted Samaritan high priest Isaac ben Amram (1855–1932); the high priest who signed her contract was Jacob ben Aaron (1874–1916).

Bride Price: 6001 Egyptian keritas, of which 3000 keritas were paid before the wedding