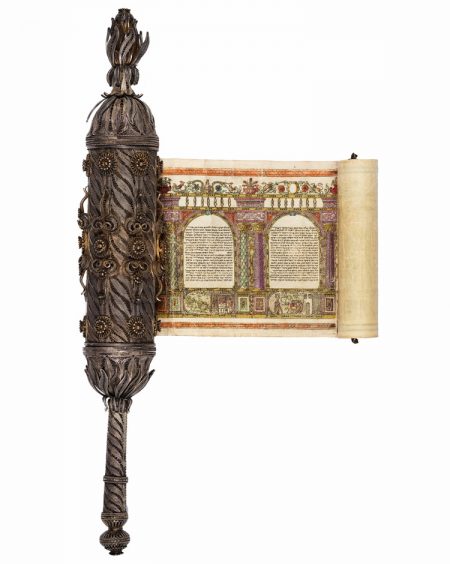 Ioannina was home to one of the few communities of Romaniot Jews that had survived in Greece since Roman times. This cylindrical case of delicate filigree, ornamented with floral motifs, is typical of the later and more refined work of Iaonnite silver-smiths. Earlier examples feature much heavier fili- gree. In Iaonnina, non-Jewish silversmiths produced Judaica, including Torah finials, for local congregations and for export to other parts of Greece and the Balkans. These silversmiths also crafted silver jewelry and small objects, using filigree techniques and motifs similar to those found in this Esther scroll case.

In Ioannina, and in Jewish communities across the Ottoman Empire, great emphasis was placed on the preparation, purchase, and presentation of betroth- al gifts and dowry items. In wealthy families, an Esther scroll housed in a filigree case was often presented as a gift to a bridegroom from his future in-laws. In Ioannina in the late nineteenth and early twentieth centuries, the most costly and prominent items in the prika (dowry or trousseau) were often a set of silver forks and spoons for sweets, a sewing machine, and an Esther scroll with its decorative case.

This case houses a mid-eighteenth century Italian Esther scroll with an engraved and vibrantly hand-colored border. As the illustrations are modeled on a border design for a megillah created by Francesco Griselini (cat. no. 85), the scroll was most likely printed in Venice. For many centuries an active trade route between Venice and various Greek communities thrived. Jewish involvement

in this trade included the transportation, purchase, and sale of commodities such as olive oil, as well as participation in the exchange of Jewish ceremonial objects among these various centers. The latter is reflected in this example of an Italian Esther scroll housed in a case crafted by an Ioannite silversmith. 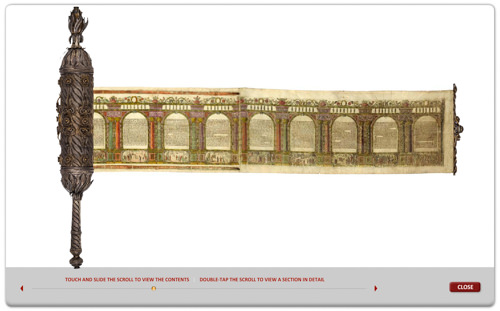