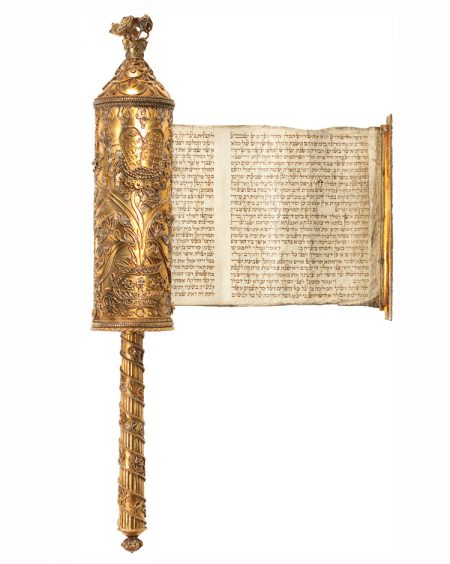 Jewish ceremonial objects crafted of gold, such as this elegant Esther scroll case, are exceptionally rare. Synagogue and personal Judaica objects were usually made of silver. While several gold Jewish marriage rings are known, only a small number of larger-scale gold Judaica objects are extant. It is likely that over the generations, gold objects of Judaica were melted down for the intrinsic value of the precious metal.

This cylindrical case is ornamented with delicate applied filigree. Emerging from a vase at the center is a large naturalistic flowering vine with scrolling stems and blossoms that extend across the case’s decorated surface. Large blossoms support or frame the Temple Implements (objects associated with
the Holy Temple of Jerusalem), motifs frequently found on a variety of Italian Jewish ritual metalwork. Applied Tablets of the Law are placed on the largest central floral motif, a wreath composed of small flowers with centers of granulation, forms that may suggest sunflowers. Two more floral clusters, or sunflower motifs, emerge from the same stem and support a censer and the High Priest’s mitre. Be- neath the mitre, additional flower-filled vases frame a large menorah. Although the Temple Implements are Jewish symbols, the decoration does not relate specifically to the Esther story.

It is noteworthy that two almost identical Esther scroll cases of this type, undoubtedly created by the same maker, survive. Based on the employment of the Temple Implement motifs integrated into a creative and lush setting, in addition to exuberant ornamentation, they have been localized to seventeenth-century Rome. They also have been associated, however, with seventeenth-century Venice, whose goldsmiths were renowned for their exquisite filigree work. Venice was a major center for the production of Jewish ceremonial metalwork used in communities throughout the Italian peninsula and beyond.

One of the two similar cases contains a seventeenth- century scroll with gilt borders and restrained ornamentation. This may be the scroll for which the case was produced, and might suggest the type of work originally made for the Braginsky Collection case, which now contains a later, undecorated scroll.