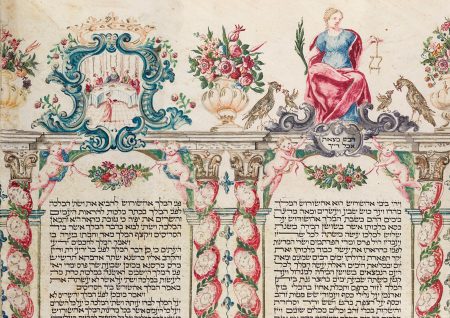 The decorative program of this monumental Esther Scroll features elaborate text illustrations, allegorical figures, as well as putti and other ornamental motifs.  The text of the biblical Book of Esther is written within arcades, flanked by tortile columns and topped by a balustrade supported, within each arcade, by two flower-bearing putti and surmounted with elaborate floral and faunal motifs.  A series of miniatures set above and below the text columns forms the borders of the megillah and depict the dramatic events of the story in a detailed sequence of vignettes. The miniatures in the upper border alternate with a series of seated allegorical figures, each atop a cartouche inscribed with descriptive Hebrew verses. The scenes are richly painted in multicolored gouache and further ornamented with gold and silver paint. The style of the painting, the various architectural and ornamental motifs, as well as details of dress and landscape, all point to a Northern Italian origin.

The text illustrations, from right to left, alternating between images below and above the text columns:

l. The King’s banquet in Shushan. The crowned Ahasuerus seated at a table, flanked by his officials (Esther 1:3)

3. Ahasuerus consulting with the seven ministers of Persia and Media as to the fate of the disobedient Vashti (Esther 1:13-15)

4. In an open landscape, Mordecai leads Esther to the King’s palace (Esther 2:8)

5. The maidens before King Ahasuerus (Esther 2:12)

6. Esther preparing for her turn to visit the King (Esther 2:15)

7. The hanging of Bigthan and Teresh, royal chamberlains, whose plot to kill Ahasuerus was thwarted by Mordecai (Esther 2:21-23)

8. All the King’s servants bowing down to Haman (Esther 3:2)

9. Haman offers King Ahasuerus money for the destruction of the Jews. Ahasuerus raises his hand to refuse the money (Esther 3:9-11)

10. Esther’s servant brings Mordecai clothing, so that he might remove his sackcloth (Esther 4:4)

11.  Mordecai informing Hathach, royal chamberlain and messenger from Queen Esther, of the plot to destroy the Jews and giving him a copy of the decree (Esther 4:6-8)

13. Haman sees Mordecai standing at the gate refusing to bow down to him (Esther 5:9)

14. Haman building a gallows upon which to hang Mordecai (Esther 5:9)

15. King Ahasuerus, unable to sleep, commands that his book of records be read to him (Esther 6:1)

16. Haman recounting to his wife and advisors all that had befallen him (Esther 6:13)

18. The King returns from the garden as Haman falls on Esther’s couch (Esther 7:8)

19. Esther pleading with King Ahasuerus to annul the decree against the Jews (Esther 8:5)

21. Mordecai in royal robes and a great golden crown takes leave of the King (Esther 8:15)

23. The Jews striking their enemies, a second image (Esther 9:5)

28. Mordecai preaching to the Jews from a pulpit. This scene derives from an alternative interpretation of the final verse (Esther 10:3)

The Allegorical figures: from right to left:

l. Temperance – a seated female figure holding a bridle and a palm branch. As a bridle restrains a horse, so does Temperance hold appetites in check. Like most allegorical figures in this scroll, this image is modeled after Cesare Ripa’s lconologia, a handbook of allegories, personifications and symbols of vices and virtues. First published in Rome in 1593, Iconologia became a popular manual for artists seeking to depict concepts, and was republished in numerous editions, and continued to flourish well into the eighteenth century. The inscription in the cartouche below (above text column 1) reads: “If you find honey, eat only what you need” (Proverbs 25:16). This allegory likely relates to Ahasuerus’ banquet described in the text of the scroll and depicted below.

2. Hope – A seated female figure, looking up to heaven, holding a flowering branch in her right hand, by her feet an anchor. The inscription in the cartouche reads “Trust in the Lord with all thy heart” (Proverbs 3:5). Hope gives stability to mankind as an anchor provides stability to a ship.

3. Pride – A woman seated on a throne between two peacocks. The inscription in the cartouche reads: “Before destruction the heart of a man is haughty” (Proverbs 18:12)

4. Faith – A seated man, holding an open book and a Torah scroll covered in an elaborate mantle and topped with a silver crown and a pair of rimonim. Beside the man an elephant. The inscription in the cartouche reads: “A faithful man shall abound with blessings” (Proverbs 28:20)

5.  Faith (a second allegory) – A seated woman with a candle in one hand and an open book in the other. The inscription in the cartouche reads: “open thine eyes, and thou shalt be satisfied with bread” (Proverbs 20:13)

6. Humility – A seated women with a lamb in her lap. The inscription in the cartouche reads: “and before honor goeth humility” (Proverbs 18:12)

7. Mercy – A women holding a fruited branch in her right hand. To her right, a pelican feeds its young from its own flesh. The inscription in the cartouche reads: “He made them also to be pitied” (Psalms 106:46)

8. Music – a seated female figure playing a cello with a sheet of music on her lap. The inscription in the cartouche reads: “the time of singing is come” (Song of Songs 2:12). This allegory is serendipitously situated above the portion of the scroll’s text which describes the joyful celebration of Purim.

9. Justice – a seated female figure holding a sword in her right hand and a pair of scales in her left hand. The inscription in the cartouche reads: “A just balance and scales are the Lord’s” (Proverbs 16:11).

10. Peace – a seated female figure is holding an olive branch, a symbol of peace, in her right hand and a cornucopia, symbolizing the abundance which follows peace, in her left. The inscription in the cartouche reads: “And spoke peace to all his people” (Esther 10:3).

A separate sheet containing the blessings recited before and after the reading of the megillah includes four vignettes: Above the columns of text, at right, the Triumph of Mordecai and at left, Haman hanging from the gallows; below the text at right, Jews celebrating their salvation and at left, the Jews striking at their enemies.

This monumental Megillat Esther belongs to a group of seven elaborately illustrated scrolls all embellished with a similar program of decoration. The other 6 scrolls are found in the following collections:

The scenes illustrating the Book of Esther and the allegorical imagery are almost identical in all these scrolls, with minor differences deriving from the length of the scroll and the consequent different number of text columns. The remarkable similarity in the themes and their manner of representation makes it likely that the artists shared a common model.