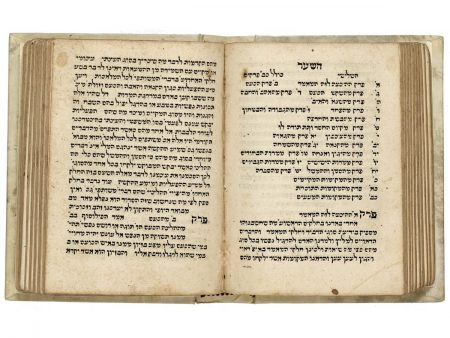 Sefer Nofet Tzufim was written by Judah bar Jehiel, “Messer Leon,” of Mantua (d. ca. 1499). The work is the first Hebrew printed book to have appeared during the lifetime of its author. It deals with biblical Hebrew rhetoric, discussed in light of its classical Greek and Latin counterparts. A pioneering work on a topic of great interest in the Italian Renaissance, it was considered controversial among Jews.

The printer of this work, Abraham ben Solomon Conat, originally was a scribe and physician. It was long believed that he was Ashkenazic and that his Ashkenazic Hebrew type mirrored his handwriting. Malachi Beit-Arié established, however, that Conat was of Provençal origin, as indicated by his use of Sephardic script in a manuscript signed by him. The name Conat, furthermore, seems to refer to a Provençal village.

The first book that came from Conat’s press was apparently Behinat Olam, by the Provençal author Jedaiah Bedersi. Adri Offenberg considered Nofet Tzufim to be Conat’s second, while Shimon Iakerson believed that some smaller books may have preced- ed it. Its year of printing may be established as 1474 if a poem appearing at the end of this edition can be proven to have been copied directly into a manuscript dated 12 October 1474 that is now housed in the Biblioteca Ambrosiana in Milan. It is noteworthy that Estellina, the printer’s wife, was the first woman documented to be involved in printing Jewish or non-Jewish works; her name appears in colophons of two of Conat’s total of eight printed editions.

The Braginsky copy appeared in an auction featur- ing books from the library of the Earl of Rosebery in 1994. It belonged originally to Baron Mayer Amschel de Rothschild (1818–1874), who had bought it from the well-known Berlin book-dealer A. Asher in 1868. Rothschild’s daughter Hannah married the 5th Earl of Rosebery in 1878. [ e s ]