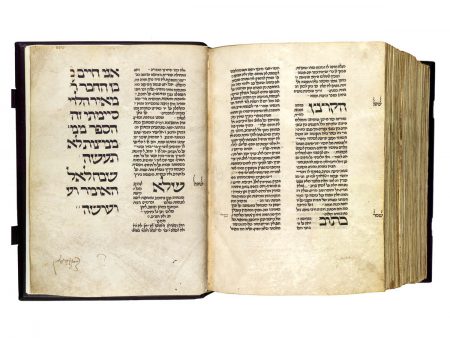 This is the earliest known manuscript of Moses of Coucy’s classic legal code and the earliest dated codex in the Braginsky Collection. It is possible that the manuscript was written in Sierre (Valais), Switzerland. This hypothesis is based on the fact that in the Bibliothèque nationale in Paris there is another manuscript (ms. hébr. 370) of the same work, by the same scribe, which is assumed to have been copied in Sierre a few years later than the Braginsky manuscript. More than two centuries after the writing of the manuscript, in 1528, Joseph ben Kalonymos acquired it in Posen from someone called Ezekiel, and completed the few leaves that were missing by that time. In the twentieth century the manuscript was one of the proud possessions of the famous Schocken Collection.

In addition to being a leading rabbinic scholar, Moses of Coucy was also an interesting public figure. In 1236 he traveled from his native France to Spain, where he delivered fiery speeches to wide audiences and urged them to observe the commandments more strictly, particularly those pertaining to tefillin, mezuzah, and tzitzit. He also admonished the people to be more ethical in their behavior toward Gentiles, both in the realms of business and personal rela- tions. In 1240 Moses took part in the disputation on the Talmud held in Paris.

His magnum opus, the SeMaG, is arranged according to the negative and positive commandments, with rich material related to them under each. He was deeply influenced by the legal code of Maimonides, the Mishneh Torah. The writings of Moses of Coucy, therefore, were one of the channels through which the Maimonidean code gained wide recognition in Ashkenaz. The SeMaG became a major and accepted source for halakhic rulings. It was frequently quoted and abridged; many commentaries were composed on it. Surviving in a relatively large number of manuscripts, it was one of the earliest Hebrew books ever printed. [ m s ]