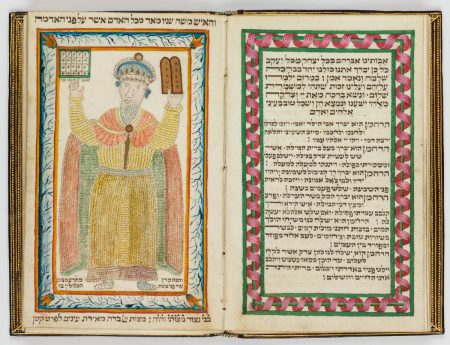 The place of production of this illustrated prayer book for the ritual circumciser is not entirely clear. An inscription on the title page states that it was
a gift from Mendel Rosenbaum to his brother-in- law Joseph Elsas of Nyitra, Hungary (now Nitra in Slovakia). The otherwise unknown scribe signed
his name on folio 3v as Leib Zahr Sofer (scribe) of L”B (Lackenbach, Hungary, now eastern Austria). Although it cannot be known with certainty where the scribe copied the manuscript, Nyitra is the likeliest option for two reasons. First, it is not likely that the scribe would have signed his name with his city of birth if he were still residing there. Second, the manuscript is reminiscent of the work of the most important Hungarian scribe of the early nineteenth century, Mordecai ben Josl, also known as Marcus Donath, who worked in Nyitra. Donath is known to have produced around a dozen manuscripts, as well as an engraved megillah.

The artistic school of Nyitra is known for its use of Hebrew micrography. Using this technique, Moses is depicted here as a calligram, holding the Tablets of the Law and pointing to the five volumes of the Pentateuch. The text above reads: “Now Moses was a very humble man, more so than any other man on the earth” (Numbers 12:3), whereas the text below, inspired by Proverbs 7:1–2 (with mistakes) reads: “My son, keep my commandments and live; the commandments of the Lord he created in an enlightening manner,” includes a chronogram. The letters marked with a dot have a total numerical value of 576, i.e. the Jewish year 5576 (1816). Within the frame in the right-hand bottom corner is a paraphrase of Exodus 34:29, “And behold, the skin of his face was radiant,” to which is added in the left-hand corner “because of the 613 commandments contained in it.” Among the texts used for the calligram is that of the Ten Commandments. [es]

Seder Tefillot u-Virkhot ha-Mohel (Order of prayers and blessings for the circumciser)
[Nyitra (Hungary)], copied and decorated by Leib Zahr Sofer of Lackenbach, 1816