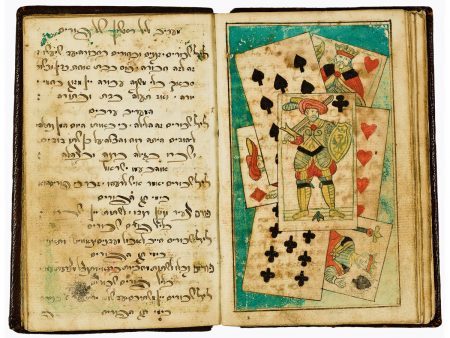 The central event of the festival of Purim is the reading of the biblical book of Esther from a scroll at night and on the morning of the festival. Other practices associated with the holiday include dressing in costume, participating in satirical plays or parodies, sending gifts of food to friends and neighbors (shlakhmones in Yiddish), giving charity to the poor, and partaking in a festive meal. The celebration reenacts the rejoicing of Jews saved from destruction in Persia, mentioned at the end of the book of Esther.

This manuscript contains the text of the medieval Massekhet Purim, a Purim parody by the Provençal scholar Kalonymus ben Kalonymus. Born in 1286 in Arles, he was living in Rome when he wrote this work in the early 1320s. Although it is not known when he died, it must have been after 1328, when he was back in the Provençe. Massekhet Purim, which humorously imitates the style and idiom of the Talmud, deals with eating, drinking, and drunkenness during Purim.

The illustrations in the Braginsky manuscript include harlequins, a street musician, and seven playing cards arranged as a trompe l’oeil. This illustration is in keeping with the introductory text of chapter four, “Each person is obligated to play dice and cards during Purim.” Only a few other examples of a trompe l’oeil in Hebrew manuscripts are known.

There was particular interest in Kalonymus’s Massekhet Purim in the Netherlands in the eighteenth century, when Purim parodies and special Purim plays were popular. The scarce historical documents available indicate that the Ashkenazic Jews of Amsterdam were active revelers who immersed themselves in carnivalesque festivities, including masquerades and pageants in which music was played and torches were carried. These celebrations, which extended outside the borders of the Jewish quarter, often continued after the festival. Consequently, in addition to fearing the desecration of the Sabbath, which often occurred, the Ashkenazic authorities were concerned about the effect these public festivities had on their relationships with the non-Jewish authorities. In 1767 the Amsterdam Ashkenazim even issued a statement that when Purim occurred on a Sunday Jews had to respect the Sunday rest and could not celebrate outside the Jewish quarter. [es]