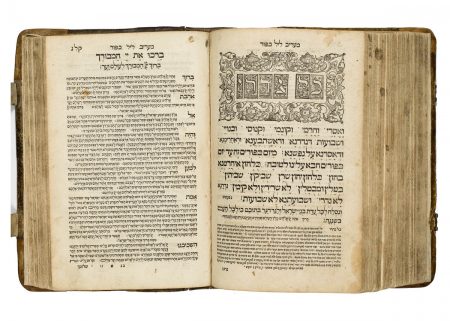 Mahzor According to the Ashkenazic Rite

This printed book is rich in its many layers of information. The mahzor contains the standard prayers and special liturgical hymns for the entire year ac- cording to the custom of Western Ashkenazic Jews. At the head of each liturgical hymn, a short note summarizes its poetic features and offers a capsule of the theme of the poem. The main prayer text is accompanied by a commentary and by a compilation of rules and customs relating to the rituals to be followed throughout the year. The latter is headed Ma’agelei Tzedek, the title by which the entire mahzor is subsequently called.

The volume contains many comments written in an Ashkenazic hand of the seventeenth century. The annotations correct errors in the printed text, add explanations, and complete omissions.

Other handwritten additions are found throughout the book. The most important of these is the one on the inside of the back cover written in Hanau and dated 1697. It was written by Samuel Zanwel ben Aaron Benjamin Wolf, an exile from Worms. Samuel was the son-in-law of Juspa, Shammes of Worms, whose autograph work is described in cat. no. 28. The note describes the funeral, in 1636, of Elijah Loanz, the Ba’al Shem of Worms. Born in 1564, Loanz was rabbi in several German cities, and the author of Bible commentaries and kabbalistic works. He gained fame as a dispenser of amulets and incantations, hence his title, Ba’al Shem, the Master of the Divine Name. Loanz also assisted the Christian printers of Hebrew books in Basle, and may have had contacts with Johannes Buxtorf, the famous Christian Hebraist there. The other handwritten entries in the mahzor concern the genealogy of Loanz’s family and serve as a primary source for his biography. This volume, associated with the important Jewish community of Worms, may have been used there as a communal prayer book. [ms]

Mahzor According to the Ashkenazic Rite
Venice, printed by Giorgio di Cavalli, 1567