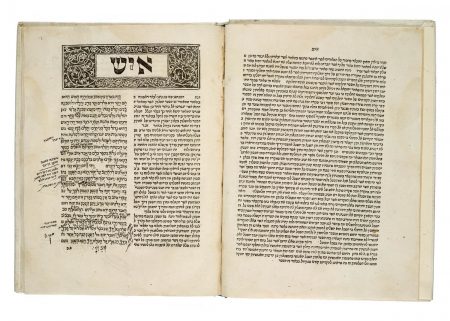 The beginning of Hebrew printing in Naples is well documented. On 18 March 1487 four men, among whom was a certain “magistro Josep hebreo theotonicis,” entered into a legal agreement to print Hebrew books in Naples, where the political situ- ation for the Jews under the reign of Ferdinand I, King of Naples, was relatively favorable. Magister Josep, the first printer of Hebrew books in Naples, can be positively identified as Joseph ben Jacob Ashkenazi Gunzenhauser. Born in Nuremberg before 1434, he arrived in Italy in the middle of the century. His edition of Job with the commentary of Levi ben Gershom was the third out of the press’s thirteen publications, a number that includes those of his son and business partner Azriel. This volume is, in fact, the first part of a larger edition with text and commentaries on Job, Song of Songs, Ecclesiastes, Lamentations, Esther, Daniel, Ezra/Nehemiah, and Chronicles. At least fifty copies of this edition are known to exist.

Levi ben Gershom (1288–1344), also known by his acronym Ralbag and his Latin patronym Gersonides, was a mathematician, astronomer, philosopher, and biblical commentator, who was most probably born in the Languedoc, France. His major work is Milhamot Adonai (Wars of the Lord), which he completed in 1329. It is a lengthy, but comprehensive, work on religious philosophy that became popular. Levi ben Gershom wrote commentaries on most of the books of the Hebrew Bible, including the book of Job, which he completed in 1325. Before it was printed by Gunzenhauser, his commentary on Job had been printed on the Ferrarese press of Abraham ben Hayyim in 1477; this edition did not include the biblical text. The commentaries of Levi ben Gershom reflect a strong interest in philosophy and theology, and contain what he calls to’aliyyot, ethical, philo- sophical, and religious teachings that may be taken from the text.

The Braginsky copy is of particular importance be- cause it is replete with manuscript annotations in a Persian Hebrew hand of the sixteenth or seventeenth centuries, literally on every page of the copy. These glosses in Hebrew and Judeo-Persian deal with the biblical text, and not with the commentary. [es]