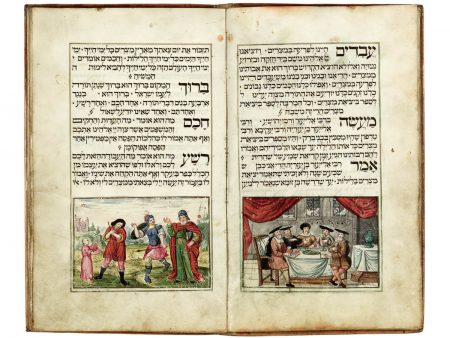 Aaron ben Benjamin Wolf Herlingen was born in Gewitsch, Moravia, around 1700, and worked in Pressburg (now Bratislava), Vienna, and perhaps elsewhere (see cat. no. 47). A 1736 census in Press- burg listing Herlingen as “The Moravian Aaron of Gewitsch, official in the Imperial Library in Vienna: one wife, one assistant, one handmaid,” proves that he held the position of library scribe there.

Today over forty manuscripts signed by Herlingen are extant, while approximately a dozen more are attributed to him. The Braginsky Collection contains one attributed and three signed works; this Haggadah of 1725; a book of Psalms from 1737 (Braginsky Collection 63, not in this catalogue); a sheet with Latin micrography dated 1751 (cat. no. 48); and an unsigned Grace after Meals from 1751 (cat. no. 47).

This Haggadah has sixty painted illustrations and three decorated initial word panels. The title page portrays Moses and Aaron, who flank the arch that frames the title. The scene below, with the three siblings Moses, Aaron, and also Miriam, wearing a point- ed hat, combines an image of Miriam’s well with the falling of the manna. The Hebrew text between the panels is from the Babylonian Talmud (Sota 11b); it recounts that the Israelites were delivered from Egypt as a reward for the righteous women who lived in that generation. It is possible that the Haggadah was produced for a woman named Miriam.

On folio 3v the five Talmudic sages of Bene-Berak are shown seated at a table. The text recounts that they discussed the Exodus from Egypt through the night until their students came to tell them that the time for the Morning Prayer had arrived. In the Haggadot from Amsterdam printed in 1695 and 1712 the illustration accompanying this text was modeled after a biblical scene depicting the banquet Joseph gave for his brothers, in which more than five figures are present. The handwritten eighteenth-century copies based on these printed editions usually portray anywhere from six to over a dozen men in this scene. This Haggadah is one of the few exceptions in which only the five sages mentioned in the text are depicted. [es]

Passover Haggadah, with Yiddish instructions and translations of concluding songs
Vienna, copied and decorated by Aaron Wolf Herlingen of Gewitsch, 1725