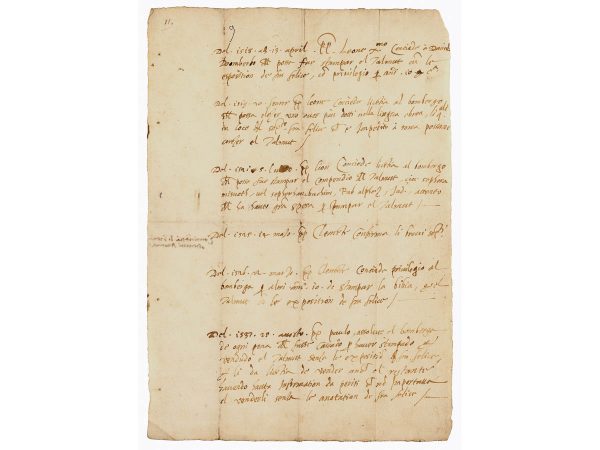 Documents Concerning the Condemnation and Burning of the Talmud

Throughout its history the Catholic Church has taken great interest in defining and identifying heretics and their followers. This interest increased after the invention of printing, which enabled a much wider dissemination of presumed heretical ideas. Jews were under particular scrutiny, for obvious religious and historical reasons. On 9 September 1553, after Pope Julius III had decreed that all copies of the Talmud in Rome be gathered, thousands of these and other Jewish books were set afire in the Campo dei Fiori. These public events were part of a strategy that developed in the 1540s and 1550s and resulted in the banning and burning of larger groups of
Jewish and non-Jewish heretical books. An essential role in this process was played by Cardinal Giovanni Pietro Carafa (1476–1559), who became Pope Paul IV in 1555.

On 12 September 1553 another papal decree was issued, demanding that all copies of the Talmud throughout the Catholic world be gathered and destroyed. In Venice – then the world center of Hebrew printing, largely through the efforts of Daniel Bomberg – the order was interpreted to include other Jewish books as well. On Saturday, 21 October 1553 all books gathered were burned in Piazza San Marco.

This collection of eleven documents in Italian, which relate to this dark period in the history of the Hebrew book, was probably part of a file that belonged to a Venetian Inquisitor. They constitute a more or less chronological account of the events in Venice. Reproduced here is a summary of six papal briefs from 1518–1537 regarding the licenses to print Hebrew books in Venice granted by Popes Leo X, Clement VII, and Paul III to Daniel Bomberg. Other documents include: orders to converted former Jews to inspect Hebrew texts for heretical content; copies of the relevant papal decrees; and reports on the events in Rome and Venice. [es]

Eleven Documents Concerning the Condemnation and Burning of the Talmud in Venice
Venice, various hands, 1553–1555