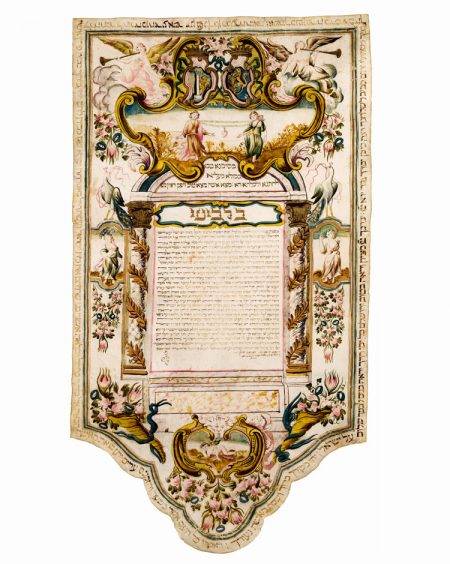 Despite the harsh conditions of life under the rule of the popes, the Jewish community of Rome−the oldest in continuous existence in Europe−developed its own distinctive culture. While living in the overcrowded and noisy ghetto, Jews sponsored the creation of attractive pieces of Judaica that are admired to this day. One focus of local creativity was the illustrated ketubbah. Roman ketubbot are distinguished by their elegant Hebrew calligraphy, decorative designs, and attractive appearance. Customarily the bottoms taper to points because the parchment sheets were rolled from top to bottom and then tied with a ribbon attached at the end. The most popular decorative themes include biblical episodes, allegorical repre- sentations, and delicate micrographic designs.

Surrounding the text of this contract is an architec- tural frame featuring a pair of marble columns entwined by gold leaves and topped with Corinthian capitals. A large cartouche rests on the arch support- ed by the columns. In it is a pastoral landscape in which stand a man and a bare-breasted woman joined around their necks by a chain with a heart- shaped pendant. This visual metaphor of concordia maritale (harmonious marriage) was the most popular allegorical representation used in Roman ketubbot, despite the obvious Christian connotation of the chain, a Catholic symbol of the indissoluble bond of marriage. The depictions of this and other allegories were inspired by popular contemporary manuals for artists, especially Cesare Ripa’s Iconolo- gia, whose first illustrated edition was published in Rome in 1603.

Enhancing the allusion to matrimonial harmony are family emblems of the bridal couple that appear next to each other in a cartouche above the central allegorical image. The emblem at the right, depicting a rampant lion climbing a palm tree, is that of the groom’s family, Caiatte; the emblem at the left, portraying a rampant lion touching a white column, belongs to the family of the bride, De Castro. Each emblem is surmounted by the “crown of good name,” an idea reinforced by the pair of semi-nude female trumpet-blowing angels personifying fama (fame). Additional semi-nude figures appear at the sides. Finally, the influence of Italian culture is demonstrated in the cartouche at the bottom, with the depiction of Cupid lying next to his bow and quiver.