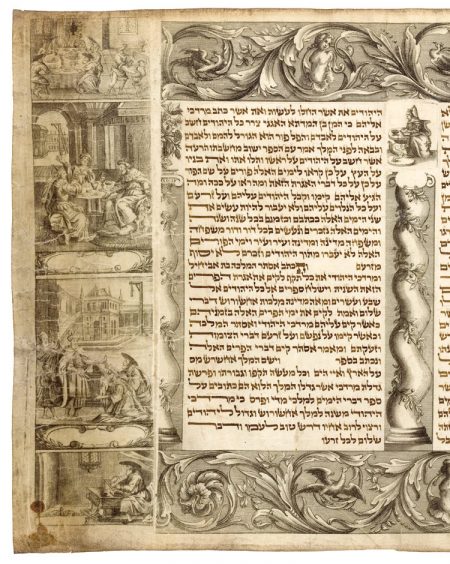 This Bohemian scroll is a rare example of a megillah with engraved borders produced outside the print- ing centers of Amsterdam and Venice. In the few complete copies of this scroll, the printed signature of the engraver Paul-Jean Franck appears in the first panel. The borders of both this megillah and those engraved by Franceso Griselini (cat. no. 85) demonstrate that non-Jewish artists were employed to create Jewish ritual art.

The decorative program of this megillah contains seven scenes from the Purim story arranged vertically; three appear before the opening of the text, while an additional four occur at the end of the scroll. In addition, eleven smaller vignettes and figures are depicted between the columns of text. In the upper and lower borders, scrolling foliate vines contain cartouches with castles and mansions in landscape settings, nude, half-length female figures, and peacocks. Although unrelated to the biblical text, these create a decorative border for the scroll.

Smaller vignettes placed on top of monumental spiral columns were engraved onto individual copperplates printed after the larger frame was in place. The first scene shown here depicts the hanging of the traitors, Bigthan and Teresh. This is followed by Esther and her attendants who inform her that Mordecai is outside the palace gates in a state of mourning at the news of Haman’s edict. In the next vignette, Ahasuerus gives his signet ring to Haman, granting him the authority to proceed with his plot against the Jews. This last scene is placed out of order, most likely due to a printing error. In other examples of this border these vignettes are placed in varying sequences. The last three scenes placed above columns depict Haman falling on Esther, Esther in front of Haman’s house, which has been given to her by Ahasuerus, and Esther writing her letter to the Jews.

The scroll ends with four scenes, portrayed from top to bottom: Jews celebrating the holiday at a feast; the banquet at which Esther denounces Haman to the king, with the gallows prepared for Mordecai in the background; Ahasuerus extending his scepter to Esther and granting Mordecai his ring as Haman hangs in the distance; and Mordecai, dressed as a contemporary eighteenth-century Jew, composing a letter to be sent to Jews across the kingdom, chronicling the preceding events. 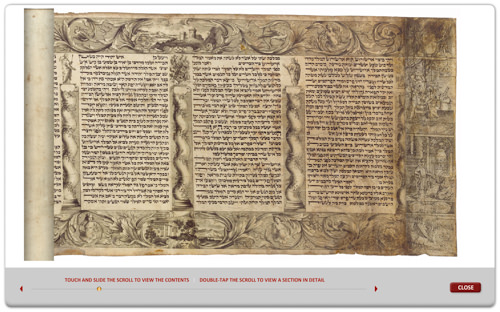