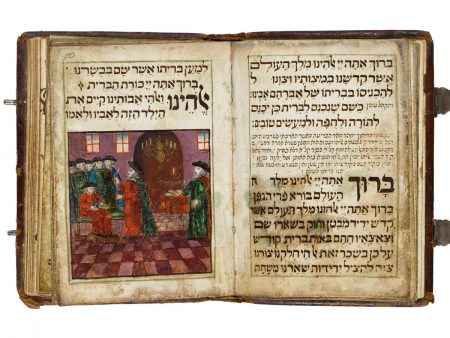 Uri Fayvesh’s colorful manuscripts usually contain painted rather than drawn images. The Braginsky manuscript has a simple decorated title page with the name of an owner, Joseph ben Samuel, and an unidentified coat of arms. Between the liturgy for the circumcision ceremony and the Grace after Meals a basket with flowers is used as a space-filling device. There are two red and two more elaborate multicolored ornamental initial words. The first, ve-kharot on folio 3r, has the outlines of the letters filled with delicate floral designs, while the second, ha-Rahaman on folio 16v, has letters that were executed to look like pleated fabrics. These “pleated letters” were inspired by printed woodcut letters.

The first of two text illustrations, on folio 10r, depicts a circumcision in a synagogue. The mohel is raising the knife, while the sandak (the one who holds the infant) is sitting on the Chair of Elijah. It is hard to discern whether the infant is, in fact, on the sandak’s knees, as the raised knife seems to suggest. The second text illustration, on folio 18r, is more original and illustrates the blessing over wine. A man, standing in a vineyard next to nine wine casks, holds a glass of wine in his right hand and a corked bottle in his left. Three more bottles are on a table to the right. This is not the only instance in which Uri Fayvesh displays an interest in the production and consumption of wine. In a circumcision book by him from 1741, in the Klau Library of Hebrew Union College in Cincinnati (MS. 599), a nude infant is shown sitting on a wine cask. [es]