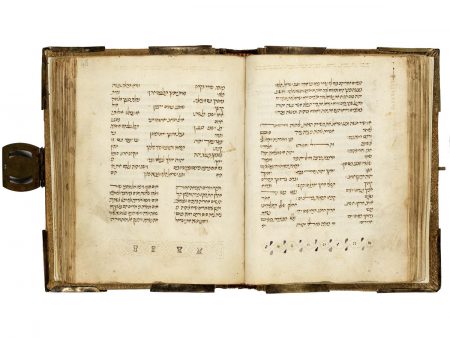 Pentateuch Based on the Hillel Codex

During the Middle Ages Jews found it important to accurately transmit the text of the Hebrew Bible. A number of manuscripts that were in circulation, some of which no longer exist, were considered of particular value. The most famous among these was the manuscript known in Spain as the Hilleli, or the Hillel Codex. The Braginsky Pentateuch manuscript was copied in Spain, most likely in the second half of the fourteenth century, based on what was considered the original Hillel Codex. Its importance for the textual criticism of the Hebrew Bible is comparable to that of MS L44a of The Library of The Jewish Theo- logical Seminary in New York, copied in Toledo in 1241; a facsimile edition of it was published in 1974, with an introduction by N.M. Sarna.

Around 1500 Abraham Zacuto (1452–ca. 1515), astronomer to Kings John II and Manuel I of Portugal, wrote in his Sefer ha-Yuhasin (Book of Family Relations): “On … [14 August 1197] there was a great persecution of the Jews in the kingdom of Léon at the hand of the two kingdoms that came to besiege it. At that time they removed from there the 24 holy books that were written some 600 years before. They were writ- ten by R. Hillel ben Moses ben Hillel, and his name was given to the codex, which was called ‘Hilleli.’ It was extremely correct and all other codices were revised after it. I saw the remaining two parts of it, containing the Former and Latter Prophets, written in large and beautiful characters. These had been brought by the exiles to Portugal and sold at Bugia in Africa, where they still are, having been written about 900 years ago. [David] Kimhi in his grammar on Numbers 10:4, says that the Pentateuch of the Hillel Codex was extant in Toledo.”

No trace of an original Hillel Codex has survived; it may have been used for the last time for a Pentateuch edition of Guadalajara, Spain, shortly before 1492.
In truth, it is not clear whether the Hillel Codex ever even existed, or whether it was a legend known only from secondary sources. In any case, the antiquity suggested by Zacuto is incorrect, as it would then have preceded all known Masoretic Bible manuscripts by no less than three centuries. [ e s ]

Pentateuch
[Spain, second half of the 14th century]