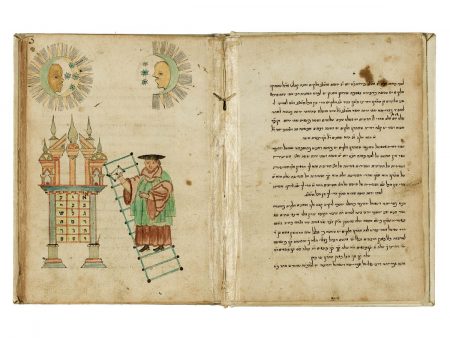 n October 1582 Pope Gregory XIII changed the calendar of the Catholic church. Heightened awareness of calendars caused by this action, and the resultant feelings of superiority by Jews regarding their own, stimulated the production of separate books on the calculation of the Jewish calendar in the Ashkenazic world. Sifrei Evronot, or Books of Intercalations, exist, among others, in illustrated Ashkenazic manuscripts of the seventeenth and eighteenth centuries. The understanding of the relationship between the texts and images of these owes a great deal to a recent study on the topic by Elisheva Carlebach.

A common image in Sifrei Evronot manuscripts is that of a man on a ladder, or near it, who reaches to heaven to obtain the secrets of the calendar. The man, who often holds an hourglass in his hand, is the biblical Issachar, one of Jacob’s sons. His presence may be explained by I Chronicles 12:33, where reference is made to “the Issacharites, men who knew how to interpret the signs of the times.” The Braginsky manuscript is the only known example that contains two images of Issachar. His appearance in each is different, but in both he holds an hourglass in his hand and stands on a ladder that rests on an unusual structure that contains letters of the Hebrew alphabet between its columns. Whereas the text facing the first image refers to Issachar, that facing the second contains no mention of him or any other figure. The first image incorporates another common element found in Sifrei Evronot illustrations, the moon with a human face, here, again, in two variant forms.

The manuscript begins with a panel containing only the word tzivvah (He [God] commanded). The page contains a portal, intended as a gateway to the celestial spheres, but which is also typical of the architectural motifs commonly used on title pages to signify a symbolic entry into the text. By writing on the construction of the calendar, scribes believed they fulfilled a religious commandment.

In this manuscript, there are numerous other decorative elements, but only one additional illustration; it portrays Moses seated at a table holding the Tablets of the Law. Depictions of Moses appear in other Sifrei Evronot manuscripts as well. The three illustrations in the Braginsky manuscript are all flat line drawings, filled in with watercolor. [ e s ]