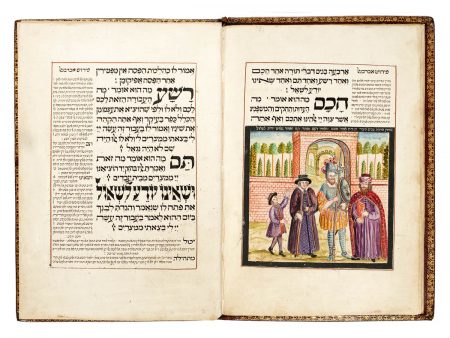 Until it appeared for auction in New York in 2007 and was subsequently acquired for the Braginsky Collection, this Passover Haggadah had resided in private hands and was not known in scholarly literature. Other works of Joseph ben David of Leipnik are well known; a number of his works appeared in facsimile editions in the 1980s. Joseph ben David’s manuscripts are among the most sought after in the Judaica market.

Although he is often considered the most influential scribe-artist of the eighteenth century, Joseph ben David was not the most productive one. Six- teen manuscripts signed by him are known. Copied between 1731 and 1740, all but one were illustrated by him as well. Fifteen of these are Passover Haggadot. He had already left his native Leipnik (Moravia; now Lipnik Nad Becvou, Czech Republic) for Frankfurt am Main by 1731. He then went to Darmstadt, where he produced manuscripts in 1732, 1733, and 1734, and settled in Altona not later than 1737. The names of some of his patrons are known through his colophons. He probably earned his living primarily as a teacher. In fact, he never refers to himself as “the Torah scribe,” as did some of his colleagues who were professional scribes. His name does not appear in the archives of the Hamburg or Altona Jewish communities.

The illustrations of Joseph ben David were innovative; he introduced new themes and a completely different palette. The iconographic program of the Braginsky Haggadah is similar to his other manuscripts of the same period and largely dependent on the printed Amsterdam Haggadot of 1695 and 1712. The colorful title page with the figures of Moses and Aaron is strongly reminiscent of a Haggadah recently discovered in the library of Blickling Hall in Norfolk, England, and of a number of other Haggadot from his hand. Its design is inspired by printed architectural title pages. Recurring elements in most of Joseph ben David’s Haggadot are the illustrations of the Pascal lamb, the matzah, and the bitter herbs. These illustrations were usually based on models older than the Amsterdam printed editions. [ e s ]