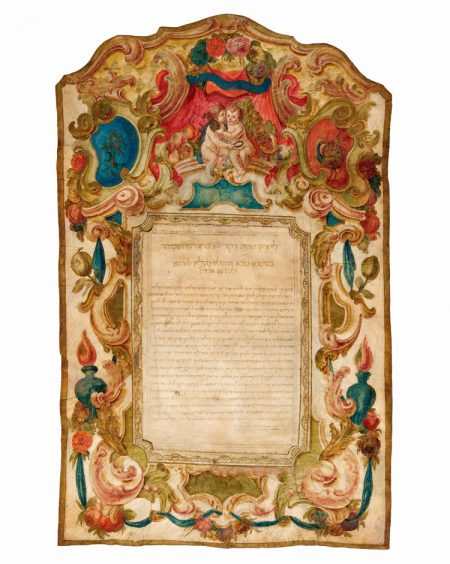 This ketubbah was written in the small Jewish community of the north Italian town of Correggio, in the region of Reggio Emilia. Correggio, part of the Duchy of Modena at the time, served the area as a center of agricultural and commercial activity. Under the ruling dukes, the local Jews enjoyed some prosperity. They were not forced to live in a segregated quarter until 1782, long after ghettos had been established in many other north Italian communities.

The text of this ketubbah, written on a separate piece of parchment, was glued to the back of the decorative border of an earlier marriage contract. This is in keeping with a custom popular among Italian Jews, wherein attractive ketubbah borders were reused by descendents of the couple for whom they were originally produced. It is also possible that in a small city like Correggio, the earlier border was recycled because no artist was available to decorate a new one.

Resembling a mirror frame or other contemporary ornamental frames, the border is decorated with late Baroque architectural and decorative motifs. The artist used opaque water colors, gouache, and some gold paint, which is only partially preserved. Large floral patterns and scroll motifs are enhanced by two blue vases with burning flames, possible symbols of love. On a Baroque arch at the center sits an engaging pair of nude children, embracing and holding symbols of marriage and love. Underneath them is a blue cartouche with a partially preserved gilt inscription, containing the verse: “Let your fountain be blessed and rejoice with the wife of your youth” (Proverbs 5:18). Additional biblical quotes appear in the delicate micrographic inscriptions that surround the innermost frame.

Emblems of wedded families flank the central motif. Against a red ground at the right, a peacock stands beneath a crescent moon. At the left, against a blue ground, an animal rears up behind a tree bearing fruits. These emblems do not belong to the Massarani and Pesah families, who are named in the text, as the border was not prepared for them. The emblem at the left seems to belong to the Sanguiné or Sanguinetti family, while the other, lesser known emblem, may be that of the Trieste family from Padua.